Frances The Mute (studio album) by The Mars Volta 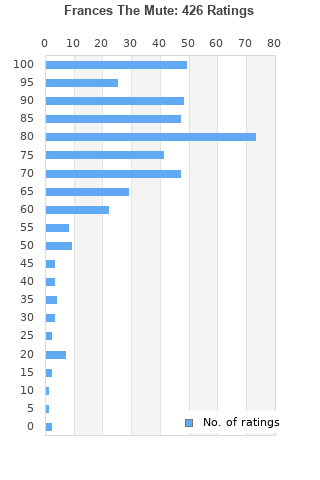 The Mars Volta - Frances the Mute [CD]
Condition: Brand New
Time left: 1d 2h 15m 27s
Ships to: Worldwide
£6.81
Go to store
Product prices and availability are accurate as of the date indicated and are subject to change. Any price and availability information displayed on the linked website at the time of purchase will apply to the purchase of this product.  See full search results on eBay

Frances The Mute is ranked 2nd best out of 7 albums by The Mars Volta on BestEverAlbums.com.

The best album by The Mars Volta is De-Loused In The Comatorium which is ranked number 468 in the list of all-time albums with a total rank score of 4,162. 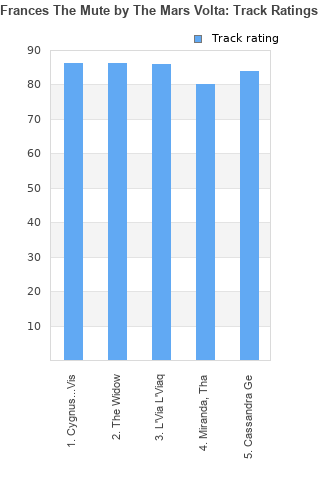 Rating metrics: Outliers can be removed when calculating a mean average to dampen the effects of ratings outside the normal distribution. This figure is provided as the trimmed mean. A high standard deviation can be legitimate, but can sometimes indicate 'gaming' is occurring. Consider a simplified example* of an item receiving ratings of 100, 50, & 0. The mean average rating would be 50. However, ratings of 55, 50 & 45 could also result in the same average. The second average might be more trusted because there is more consensus around a particular rating (a lower deviation).
(*In practice, some albums can have several thousand ratings)
This album is rated in the top 2% of all albums on BestEverAlbums.com. This album has a Bayesian average rating of 78.9/100, a mean average of 77.1/100, and a trimmed mean (excluding outliers) of 79.0/100. The standard deviation for this album is 18.6.

More difficult than the previous but much more ambitious.Every "track" is an album per se itself.Very technical musicians!

I prefer Deloused in the Comatorium and Ampuchechture, but this is still one addicting and crazy Prog Rock record.

Frances the Mute is a step back from their previous album, but is still one The Mars Volta's best albums. The albums meanders at times, but there is a lot of good content in these tracks.

The Mars Volta has proven throughout the 2000s that they're one of the greatest bands ever, and this album is possibly their greatest achievement. The 13+ minute long songs are never boring for one moment because of their epic guitar solos, eerie experimental sounds, and rapid-fire drums. While it isn't the most accessible album (the last song is 30 minutes long!) it's a must listen for any audiophile.

This album is fucking incredible. So full of ideas and almost every idea is fucking great and executed perfectly. Cassandra Gemini is a top 10 all time favorite for me. Cygnus Vismund Cygnus is a masterpiece aswell.

The widow and Lvia are both incredibly cheesy but in the most enjoyable way. Not in the cringeworthy way but in the awesome way. Miranda drags a bit so I cant give this album a 100 but its damn close.

There's some great tracks on this album, especially L'Via and The Widow.

this album blew completely my mind, one of the greatest progressive rock work ever ! a masterpiece.

Your feedback for Frances The Mute