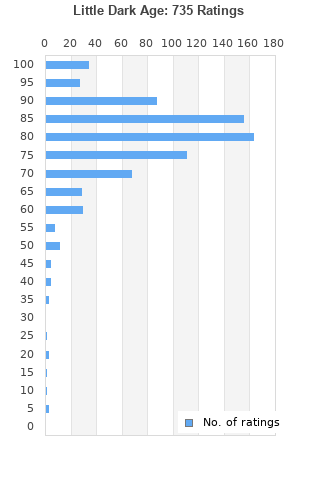 Little Dark Age MGMT CD
Condition: Brand New
Time left: 3d 11h 4m 8s
Ships to: Worldwide
$25.95
Go to store
Product prices and availability are accurate as of the date indicated and are subject to change. Any price and availability information displayed on the linked website at the time of purchase will apply to the purchase of this product.  See full search results on eBay

Little Dark Age is ranked 3rd best out of 8 albums by MGMT on BestEverAlbums.com.

The best album by MGMT is Oracular Spectacular which is ranked number 289 in the list of all-time albums with a total rank score of 6,823. 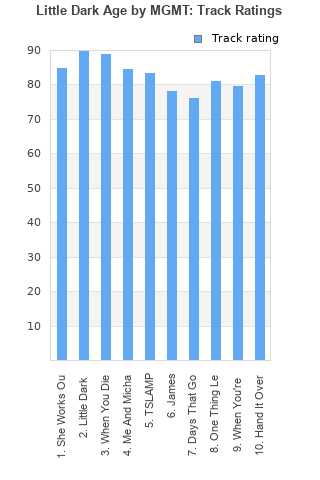 Rating metrics: Outliers can be removed when calculating a mean average to dampen the effects of ratings outside the normal distribution. This figure is provided as the trimmed mean. A high standard deviation can be legitimate, but can sometimes indicate 'gaming' is occurring. Consider a simplified example* of an item receiving ratings of 100, 50, & 0. The mean average rating would be 50. However, ratings of 55, 50 & 45 could also result in the same average. The second average might be more trusted because there is more consensus around a particular rating (a lower deviation).
(*In practice, some albums can have several thousand ratings)
This album is rated in the top 2% of all albums on BestEverAlbums.com. This album has a Bayesian average rating of 79.5/100, a mean average of 78.8/100, and a trimmed mean (excluding outliers) of 79.6/100. The standard deviation for this album is 13.0.

In my opinion, this is the best album from MGMT.

I listened to this when it first came out and really didn't like it. I'm not sure why, I guess I wasn't in the right mood. After just listening to this again, I don't know what I was thinking. It's fantastic!

goth synth pop is great. i hope mgmt makes more albums like this

Such a smart record, it starts off giving you the best stand-alone songs MGMT has ever written then slowly devolves into experimental soundscapes. A very fun listen, the album is constantly changing after each track, starting off as a pretty good synth-pop album into an evolving masterpiece.

One of the most underrated albums of the 2010s. It is in a league of its own. Deserves more praise for sure.

Some songs remind me of pet shop boys
2 best MGMT album for me
almost all tracks are very good, the music is awesome
we know a psychedelic genre is not for everyone

One of my favorite albums of 2018! I definitely feel that this went pretty underappreciated by critics, as it rarely appeared in any of the year end lists. Honestly, I would say that this record falls into my top ten for the year.

This time, MGMT takes their sound in the direction of synth-pop, and they really knock it out of the park. They return to a poppier sound, while still retaining some of their experimental tendencies. The front of this album is absolutely packed with fantastic songs - it's not too often that you get an album with so many standout tracks back to back ("Me And Michael", "Little Dark Age", and "When You Die" being among my favorites). The only criticism that I can give is that this does turn out to be one of those albums that falters a bit from time to time in the second half. But thankfully it always manages to regain its footing, and still ends on a high note. By far, my favorite thing about his album is how well each song is put together. From song structure to melodies, everything feels so purposeful and fits so well. It really shows how masterful the duo has become in terms of songwriting. I've loved MGMT since Oracular Spectacular, and it feels good to see that they are still putting out fantastic music!

Every single song that I liked has grown on me since I First heard It. "Little Dark Age" especially has become one my favorites songs of 2018.

I don't know, there is something about MGMT that resonates with me, and this darker album by them makes my type. And I do love all their hits, but I think as a album, Little Dark Age is their best.

Only just listened to this album and it's probably my second favourite release of 2018. Really nice, I love how chill it is but the lyrical content is quite the opposite.

Favourite songs: Little Dark Age, When You're Small, Me And Michael, When You Die, She Works Out Too Much

Let's be serious: when was the last time MGMT surprised everyone? For some, it was with their first album "Oracular Spectacular" where the New York duo had become the "hype" indie pop thanks to interplanetary hits like "Time To Pretend", "Kids" or "Electric Feel" and for others, it's just after their second album "Congratulations" in 2010 that surprised more than one (me, for example). But everyone agrees about their third opus of 2013 which was an incomprehensible sound weird album. We are in 2018 and the question is: are they able to surprise us again with their fourth album "Little Dark Age"? Well yes. We could hardly believe it but "Little Dark Age" is perhaps one of the most delightful albums of the duo just after "Congratulations". Bridging the gap between psychedelic pop, new wave, krautrock, italo-disco and post-tropical, MGMT sounds more than free of all unnecessary experimentation, despite some minor defects that still persist. But for the rest, Andrew VanWyngarden and Ben Goldwasser are moving in the right direction. And finally, I want to say!

Best tracks: "When You Die"

Your feedback for Little Dark Age