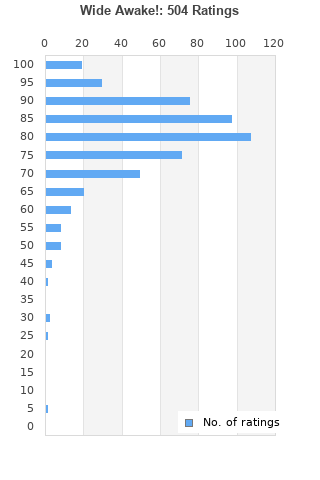 Wide Awake! (Audio CD, 2018)
Condition: Brand New
Time left: 3d 3h 44m 46s
Ships to: Worldwide
$21.04
Go to store
Product prices and availability are accurate as of the date indicated and are subject to change. Any price and availability information displayed on the linked website at the time of purchase will apply to the purchase of this product.  See full search results on eBay

Wide Awake! is ranked as the best album by Parquet Courts. 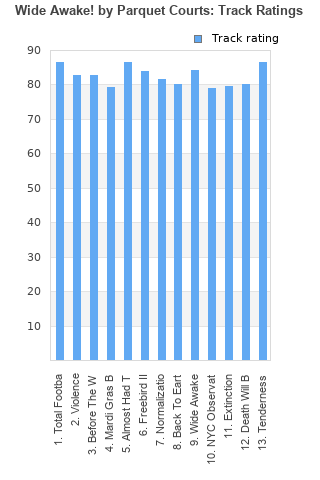 Almost Had To Start A Fight / In And Out Of Patience
Rating: 87 (120 votes)Comments:

Rating metrics: Outliers can be removed when calculating a mean average to dampen the effects of ratings outside the normal distribution. This figure is provided as the trimmed mean. A high standard deviation can be legitimate, but can sometimes indicate 'gaming' is occurring. Consider a simplified example* of an item receiving ratings of 100, 50, & 0. The mean average rating would be 50. However, ratings of 55, 50 & 45 could also result in the same average. The second average might be more trusted because there is more consensus around a particular rating (a lower deviation).
(*In practice, some albums can have several thousand ratings)
This album is rated in the top 2% of all albums on BestEverAlbums.com. This album has a Bayesian average rating of 79.9/100, a mean average of 79.5/100, and a trimmed mean (excluding outliers) of 80.1/100. The standard deviation for this album is 11.9.

Lyrically you could argue that it's the album of the decade.

Nice Album, with nice ideas in the songs. But not a highlight to my ears.

Despite being scatterbrained, Wide Awaaaaake! manages to come through with a handful of enjoyable rock tunes.

Fun, energetic and individual amongst the other punk acts currently on the market, Parquet Courts clearly stands out. Wide Awake! is a great example of how.

These guys are punk. These guys are pop.
The vocals are great and the instrumental is tight!
Some remind Joe Strummer, others don't.
A good rock'n'roll record in this era where it seems more and more outdated.

I put this album among the best Punk albums EVER, really

The genius of Parquet Courts - and his songwriters Andrew Savage and Austin Brown - is to have resurrected the New York Rock that had disappeared since the Strokes. The legacy of Velvet, Ramones, Talking Heads, Richard Hell, Sonic Youth and so many others is one of the greatest things America has ever offered for the world, and it would simply absurd to let the stupidity of the Trump government make us forget what we owe to those artists who valiantly fought for intelligence and poetry. Without ever betraying either his punky origins or departing from his principles of authenticity, "Wide Awake!" offers a new uninhibited version of Parquet Courts, with more catchy melody. This is truly their best album and a classic of 2010's rock. "Wide Awake!" will be the first album of Parquet Courts totally accessible to anyone who is too young to have known the hours of the New York punk scene.

I like it better when they're trying to sound like Wire or the Hives... less so when he tries to sounds like Elvis Costello. This may be going against the grain, but I prefer their earlier work.

FYI the line "Fuck Tom Brady" that comes at the conclusion of "Total Football" is explained as nothing personal against Tom Brady per say, rather a commentary on the type of person Tom Brady represents

Your feedback for Wide Awake!