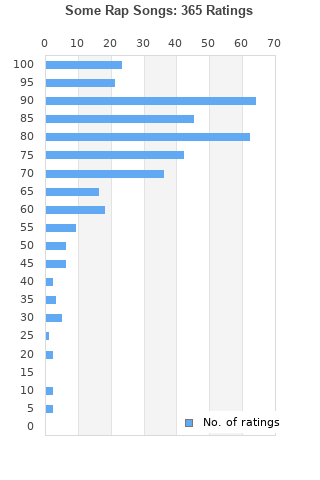 Some Rap Songs is ranked as the best album by Earl Sweatshirt. 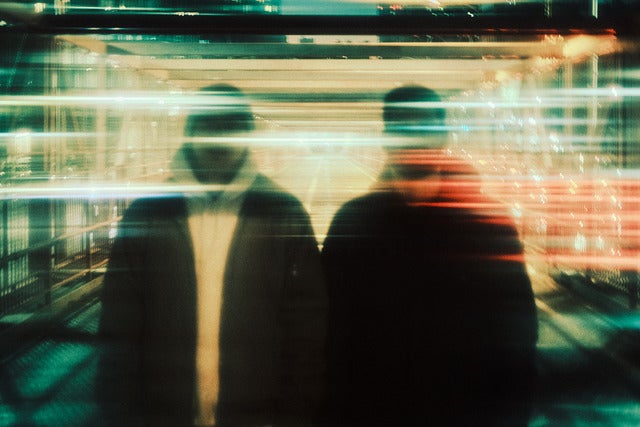 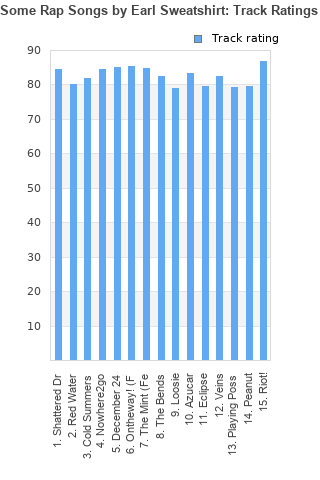 Rating metrics: Outliers can be removed when calculating a mean average to dampen the effects of ratings outside the normal distribution. This figure is provided as the trimmed mean. A high standard deviation can be legitimate, but can sometimes indicate 'gaming' is occurring. Consider a simplified example* of an item receiving ratings of 100, 50, & 0. The mean average rating would be 50. However, ratings of 55, 50 & 45 could also result in the same average. The second average might be more trusted because there is more consensus around a particular rating (a lower deviation).
(*In practice, some albums can have several thousand ratings)
This album is rated in the top 3% of all albums on BestEverAlbums.com. This album has a Bayesian average rating of 78.5/100, a mean average of 77.5/100, and a trimmed mean (excluding outliers) of 78.7/100. The standard deviation for this album is 16.5.

The pacing is very off for this album and the 24 minutes of content we receive isn't good enough to be a full record. There are the start of some great beats on here but none that are fully realised or achieve the potential that they have. The rapping style is pretty generic and quite dull when delivering the lyrics. It is quite slow and boring and for such a short album that is worrying. The lyrics are interesting in places and probably the peak of the album. It doesn't flow very well and is a disjointed set of songs. Overall, I was very disappointed with this release and was expecting more.

Great tracks. Pacing is very strange, but fits a mixtape more than an LP. Wish there was more.

Pretty genius and also a bit heartbreaking. He's hurting and he's baring his soul for us.

As an artistic statement its very admirable and a testament to Earl's ability to be chameleonic, however, it's mostly a disappointment for me (who loves Earl's work)because even though the thematic content is profound, I personally don't find the music on the LP to have much replay value.

I thought I would like this. But I found myself looking to see how much was left in the album, and it's not even a 25 minute album. The beats are really annoying on most of these songs because the sample loops every 2 seconds, Earl seems to be pretty off beat some of the time, and the features (the two that are on here) out do him. Overall, a pretty mixed bag. I did like a few songs here and there, but this was pretty hard for me to get through. I Don't Like Shit, I Don't Go Outside is definitely better.

No doubt much of the aversion to Earl on this site lies with a cadre of pearl-clutching rockists, unable to distinguish his sluggish cadence on a track like ‘Peanut’ from the non-lyric ramblings of a Gunna or a Lil Mosey (something old-head hip hop fans can be just as guilty of: https://www.instagram.com/p/B35nPCSAMFx/?utm_source=ig_emb). Make that mistake however, and midway through the song you’d miss the bitter melancholy of the lyrics: "Flashing through the pain, depression this is not a phase/Picking out his grave, couldn't help but feel out of place".

The grave in question belonged to Earl’s late father, whose voice on ‘Playing Possum’ flits between a juddering hypnagogic pop sample and an acceptance speech read aloud by Earl’s mother. MF DOOM is often cited as Earl’s key influence, but listening to this track and ‘Azucar’ reminds me of the urgent vitality in J Dilla’s final album. Like Dilla, by embracing forward-thinking production styles, Earl has perfected a sound that dares to be hopeful for its future whilst acknowledging the enormity of its past; a description fittingly apt for the man himself.

Your feedback for Some Rap Songs