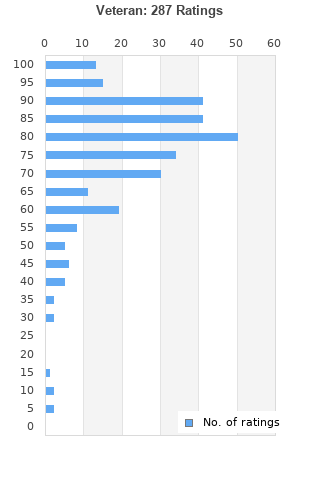 JPEGMAFIA Veteran (Limited Edition Alternate Cover) NEW CASSETTE
Condition: Brand New
Time left: 8d 14h 16m 45s
Ships to: Worldwide
$44.99
Go to store
Product prices and availability are accurate as of the date indicated and are subject to change. Any price and availability information displayed on the linked website at the time of purchase will apply to the purchase of this product.  See full search results on eBay

Veteran is ranked as the best album by JPEGMAFIA. 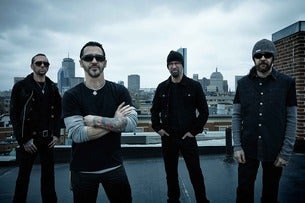 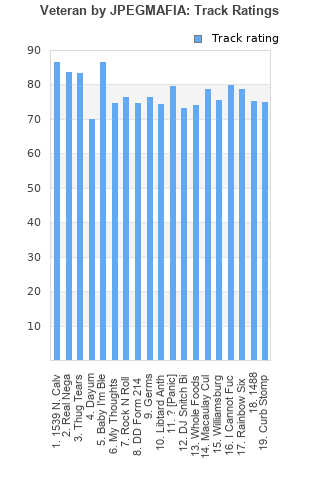 Rating metrics: Outliers can be removed when calculating a mean average to dampen the effects of ratings outside the normal distribution. This figure is provided as the trimmed mean. A high standard deviation can be legitimate, but can sometimes indicate 'gaming' is occurring. Consider a simplified example* of an item receiving ratings of 100, 50, & 0. The mean average rating would be 50. However, ratings of 55, 50 & 45 could also result in the same average. The second average might be more trusted because there is more consensus around a particular rating (a lower deviation).
(*In practice, some albums can have several thousand ratings)
This album is rated in the top 6% of all albums on BestEverAlbums.com. This album has a Bayesian average rating of 76.7/100, a mean average of 76.0/100, and a trimmed mean (excluding outliers) of 76.8/100. The standard deviation for this album is 15.8.

Can we all just appreciate the fact that a user named "ThisCharmingMan" gave this album the lowest possible score? Wonder if it has anything to do with the Morrissey track lmfaooo.

But no joke, this is my personal favorite hip hop album of all time. I think this is what the future of hip hop is. Raw, abrasive, energetic -- lyrically in your face, punk ethos, political -- experimental, industrial, loud, borrowing from all sorts of sources -- sounds like it was birthed in the darkest corners of the internet.

Right now, rap is in its creative prime. Sure there were great lyricists in the 90s but the instrumental experimentation is at its height. And for me this album is the culmination of decades of hip hop artistic momentum.

Man this is dope as fuck. Underwhelming verses at times and rather bloated, but it has some of the best beats in the game

The feel that I get from this album is that although his experimentation works and It is quite a banger, there is a lot here that needs to be enchanced, especially on the more basic aspects of hip-hop.

I think there is a lot of potential here.

Because sometimes we do not care anymore about Migos news, we feel like we're talking about K-dot because we have to, and we think that this American hip-hop never seemed also absent, we need a guy like Barrington Hendricks, aka JPEGMAFIA. Peggy's music is first and foremost a very special atmosphere, between irony and violence. Listening to this album, I had the impression to get into the mind of a real genius. Jpegmafia writes all his songs, he produces his own samples by screaming in a microphone or by striking objects. Everything is recorded, produced and mixed by him. And that makes the difference. And yet this originality does not make it enter the alternative rap box of Death Grips or Shabazz Palaces. His references are not those of experimental music or noise: his god is Ol 'Dirty Bastard. JPEGMAFIA will probably never be the new Kendrick Lamar. But he is making us demanding again with hip-hop.

This album has really interesting production and is pretty diverse, plus Peggy's rhymes are pretty dope. Keeps you on your seat until the end.

Peggy put together some killer production and dope vibes for one of the coolest and most interesting albums of the decade, maybe even century.

This album honestly grew on me a lot to the point where I think it's the must listen hip hop record of the year, even if I do enjoy some other hip hop releases a little more. Peggy captures something with this album that no other artist is grabbing onto right now, and for that alone this record deserves a listen.

Really interesting album but feel like at times hes trying to hard with the experimental side.

Your feedback for Veteran