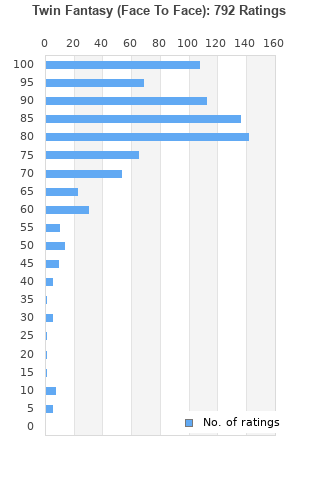 Twin Fantasy (Face To Face) is ranked 2nd best out of 16 albums by Car Seat Headrest on BestEverAlbums.com.

The best album by Car Seat Headrest is Teens Of Denial which is ranked number 213 in the list of all-time albums with a total rank score of 8,974.

Listen to Twin Fantasy (Face To Face) on YouTube 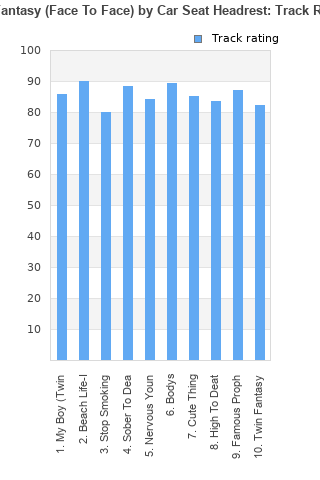 Rating metrics: Outliers can be removed when calculating a mean average to dampen the effects of ratings outside the normal distribution. This figure is provided as the trimmed mean. A high standard deviation can be legitimate, but can sometimes indicate 'gaming' is occurring. Consider a simplified example* of an item receiving ratings of 100, 50, & 0. The mean average rating would be 50. However, ratings of 55, 50 & 45 could also result in the same average. The second average might be more trusted because there is more consensus around a particular rating (a lower deviation).
(*In practice, some albums can have several thousand ratings)
This album is rated in the top 1% of all albums on BestEverAlbums.com. This album has a mean average rating of 80.0/100. The trimmed mean (excluding outliers) is 81.6/100. The standard deviation for this album is 16.8.

I liked every song!

Not sure this is the best album of 2018 so far (as of 1st April). A lot of self-indulgent stuff but some interesting moments.

Great alternative rock album. It takes you on a journey, with various emotions. 70 Minutes which are never boring and every song has some clever elements and melodies, that are unexpected, but they fit in the song perfectly. All in all, it's a symbiosis between chaotic sounds, experiments and catchy melodies.

An excerpt of my comment on "Bodys", which is the most essential track on the record and serves as something of a mission-statement.-

"That's not what I meant to say at all-

Bodys is Will at his absolute peak. Is there a better song released in the 2010s? Another track that captures the ebullient rapture of a long-distance relationship realized...face to face? "I would speak to you in song, but you can't sing...as far as I'm aware..."

The fragility of the moment is on full display. This almost didn't happen. This almost /couldn't/ happen. Don't you realize our bodies could fall apart at any second? Will you rise to the occasion, say the right thing...or trip over an attempt to compliment his shoulders? Maybe that /was/ the right thing. We'll forget that we forgot how to talk; all that's better left unsaid for fear of clumsiness; love spread across 1000 miles will be compressed into one space...when we dance.

It took me a few listens to really appreciate, but I think I'm starting to love this album. It hits a very specific kind of mood, feeling, and aesthetic throughout like nothing I've listened to before. I can sit down and appreciate this album as a whole, or on an individual song basis. The variation in song long length and structure in addition to the emotively expressed lyrics really sell this album as it delivers solid indie rock musicianship.

Changed my mind and it took some time. So much music to listen to, and to be in the mood for it. I upgraded its score continually. Deemed it as boyish, and nothing new under the sun, but now think that doesn't, and shouldn't matter, if its performed in a good way. And I wouldn't bitchvif they made a third version of this material.

The fact that Car Seat Headrest came from bandcamp and is one of the few raw rock bands to have an album ranked as number 1# in this decade tells a lot of the current estate of the genre and the future of It as well.

The thing is, this type of Rock doesn't appeal that much anymore, most of the alternative music listeners are more inclined to listen to a experimental Hip-Hop album or a art pop or art rock album like "Modern Vampires" or "A Moon Shaped Pool" at most a post-folk like "Carrie & Lowell".

Toledo's progressive punk rock tracks of 10 plus minutes should be considerated old-fashioned, and left ignored. The thing is, distorted guitars doesn't have anywhere more to go, everybody knows that, everything has already been done.

But, what makes Twin Fantasy so good, and what made It go all the way up to 1# (now It ain't anymore) it's his sincerity, his boldness, his in-your-face statements. Twin Fantasy was originaly released in 2011 in bandcamp, and It was the first major project of Will Toledo that at the time was basically the whole band. It recieved with time a cult-following but never reached a major public, not like It was with Nirvana or Radiohead, they stayed under the sheets.

CSH and Twin Fantasy Will forever stay as that statement, that little glimpse of anger to angered teens to enjoy. It's kind of what rock is If you think about it, at least is what It turned out to be.

Your feedback for Twin Fantasy (Face To Face)