Oil Of Every Pearl's Un-Insides (studio album) by SOPHIE 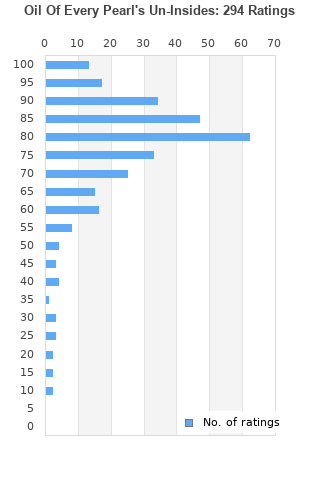 Oil Of Every Pearl's Un-Insides is ranked as the best album by SOPHIE.

Sophie B. Hawkins: Celebrating The 30th Anniversary of Tongues & Tails
The Bronze Peacock at House of Blue, Houston, United States.

Listen to Oil Of Every Pearl's Un-Insides on YouTube 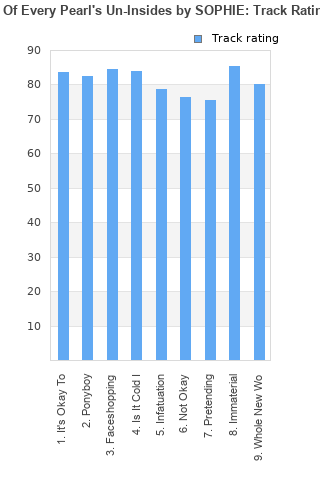 Oil Of Every Pearl's Un-Insides rankings

Oil Of Every Pearl's Un-Insides collection

Oil Of Every Pearl's Un-Insides ratings

Rating metrics: Outliers can be removed when calculating a mean average to dampen the effects of ratings outside the normal distribution. This figure is provided as the trimmed mean. A high standard deviation can be legitimate, but can sometimes indicate 'gaming' is occurring. Consider a simplified example* of an item receiving ratings of 100, 50, & 0. The mean average rating would be 50. However, ratings of 55, 50 & 45 could also result in the same average. The second average might be more trusted because there is more consensus around a particular rating (a lower deviation).
(*In practice, some albums can have several thousand ratings)
This album is rated in the top 4% of all albums on BestEverAlbums.com. This album has a Bayesian average rating of 77.4/100, a mean average of 76.1/100, and a trimmed mean (excluding outliers) of 77.6/100. The standard deviation for this album is 16.3.

Oil Of Every Pearl's Un-Insides favourites

Oil Of Every Pearl's Un-Insides comments

If it had some sort of cohesion, it would be great. Really sad to hear she's passed, I did have my hopes up for her future works.

Such a unique piece of art. It's so bittersweet to discover this after she passed. It's like twigs meets charli xcx

"Ponyboy" and "Faceshopping" sounds very disturbing, not very pleasant to hear. The main melody from "Is it cold in the water" sounds also pretty annoying, same with "Infatuation". "Not okay" and "Immaterial" have a constatly stomping sound, that is not pretty. "Pretending" is the first song, that is a solid ambient song, but also with some weird noises. It seems there is always something in her songs, some squeaking sounds, disruption or lack of melody and good rhythms at all, so every song sounds so uncomfortable, that it feels more like torture than to listen to a good album. I don't understand, why someone is listening to the album and thinks after the last song "wow, I should hear that a second time right away" because I've found that nothing was pleasant or interesting to my ear. .

It was a good experimental dance/electronica album until the last three tracks, when it became fantastic! All of a sudden she hits you with an ambient track that is Pretending, then drops the best dance song on the whole album Immaterial, and ends it with a very likable techno wankery that is Whole New World / Pretend World. In the end that song transforms into some kind of ethereal noise, and it's so good.

Very interesting project that finds new sounds to evoke some questions about sexuality, one of the best of the year.

I call it, Bold and Brash

This is a piece of art, a pop piece of art. The incredible production style of SOPHIE has always been connected with mutation, and this concept naturally becomes the topic of the album: mutation in sounds is mutation in gender and body.

Substantially we can say the same about Arca's project, but here a poppier and catchier music nature makes everything even enjoyable and "whistlable".

Through the music, the lyrics and the great music videos, we can easily intrepet the concept: the discovery and acceptance of a liquid self in gender and body. The first track offers this sense of acceptance of oneself (shown in a moving way in the video), then tracks 2 and 3 theorize this new sexual self (the video of "faceshopping" also proposes the connection with the virtual self as the mutant self; gender is liquid like a social network). "Is It Cold In The Water" sums up everything in the crucial moment of the coming-out and the final acceptance: one's gender is potentially oriented toward everything: it is water! Tracks 6 and 7 sound to me like the process of this psychological process.

The result? "Immaterial", because yes, as I said, gender is liquid as the web, and maybe that's why these sexuality themes feel so actual and burning today. This is one of the GREAT pop songs of our era, mainly because it is the new "Material Girl", and SOPHIE is a new form of standard of feminine, like Madonna was in the 80s. The final track completes the project in a superb way.

In my opinion this is a fantastic album. Let's realize that popular music is still incredibly burning. Is rock dead? But rock music is just a part of the great "popular music" planet! Let's face all the interesting projects that include video, audio, even promotion (TLOP) to communicate a message. It's new stuff! And it's stuff with something to say!

I'm so excited and moved by this album: so far, AOTY

Your feedback for Oil Of Every Pearl's Un-Insides