By The Way, I Forgive You (studio album) by Brandi Carlile 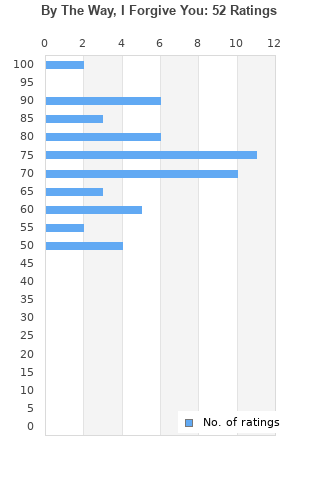 Brandi Carlile - By The Way I Forgive You [Used Very Good Vinyl LP] Black
Condition: Used
Time left: 23h 22m 1s
Ships to: Worldwide
$24.15
Go to store
Product prices and availability are accurate as of the date indicated and are subject to change. Any price and availability information displayed on the linked website at the time of purchase will apply to the purchase of this product.  See full search results on eBay

By The Way, I Forgive You is ranked as the best album by Brandi Carlile.

Listen to By The Way, I Forgive You on YouTube 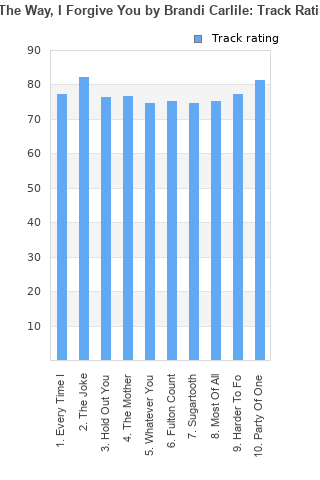 #
Track
Rating/Comments
1.
Every Time I Hear That Song
Rating: 78 (12 votes)Comments:

By The Way, I Forgive You rankings

By The Way, I Forgive You collection

By The Way, I Forgive You ratings

Rating metrics: Outliers can be removed when calculating a mean average to dampen the effects of ratings outside the normal distribution. This figure is provided as the trimmed mean. A high standard deviation can be legitimate, but can sometimes indicate 'gaming' is occurring. Consider a simplified example* of an item receiving ratings of 100, 50, & 0. The mean average rating would be 50. However, ratings of 55, 50 & 45 could also result in the same average. The second average might be more trusted because there is more consensus around a particular rating (a lower deviation).
(*In practice, some albums can have several thousand ratings)
This album is rated in the top 25% of all albums on BestEverAlbums.com. This album has a Bayesian average rating of 74.5/100, a mean average of 74.8/100, and a trimmed mean (excluding outliers) of 74.8/100. The standard deviation for this album is 11.8.

By The Way, I Forgive You favourites

By The Way, I Forgive You comments

A heartbreaking tale. This is a perfect record for me, a couple of songs im not that into but great work nonetheless . Such an impeccable voice and incredible songwriting. If i were to list my favourites, it would take more than half of the songs here.

It took several listens before I started to get comfortable with some of these songs. You cannot deny the power of "The Joke" Great album that deserves it's awards.

Underrated record that was in my opinion more deserving of Album of the Year than Golden Hour, although it wasn't nominated. It won best Americana album though and it certainly is that.

Wow. I discovered this with only 21 minutes to go before 2019 and it might have been the best first listen to any album this year. Really hear forward to play this again.

Great album. A voice full of emotion, songs that are beautifully constructed and lyrics that really hit the mark.
Fav.Track - The Joke

"The Mother" is the sweetest song I've ever heard


I've been torn with this album and its taken 4 full listens to arrive at my conclusion its ..... GOOD !

I've torn because there are several Americana bordering on Country tracks here such as 'EveryTime I Hear That Song ' , ' Hold Out Your Hand ' and 'Fulton County Jane Doe ' . Unfortunately Americana / Country just ain't my stick

Wow the lyrics , the lyrics weave incredible tales about being a Mother , her Dad , drug addiction , break up , heart ache just to name a few . I could listen to these stories all day . Lyrically stunning

Closer 'Party Of One ' saves the best till last with its piano and lush orchestra arrangement just gorgeous and an early contender for track of 2018 , lyric from this song
"Your constant over-thinking and secretive drinking ..."

This album is definitely on my 2018 best album list , and even though its February I recon its going to stay there

Your feedback for By The Way, I Forgive You