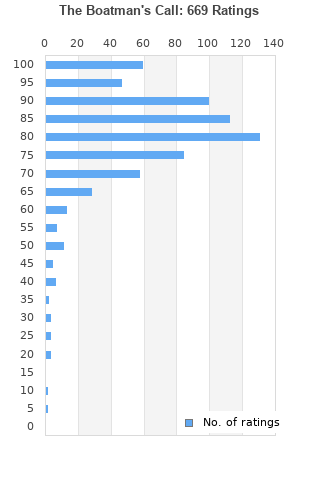 The Boatman's Call is ranked as the best album by Nick Cave & The Bad Seeds. 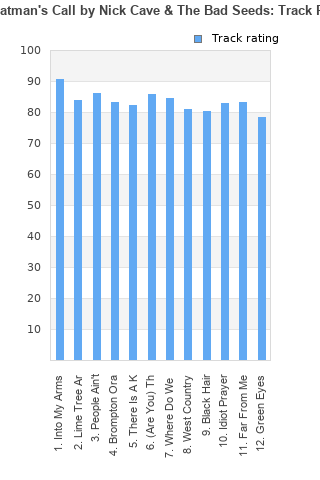 Rating metrics: Outliers can be removed when calculating a mean average to dampen the effects of ratings outside the normal distribution. This figure is provided as the trimmed mean. A high standard deviation can be legitimate, but can sometimes indicate 'gaming' is occurring. Consider a simplified example* of an item receiving ratings of 100, 50, & 0. The mean average rating would be 50. However, ratings of 55, 50 & 45 could also result in the same average. The second average might be more trusted because there is more consensus around a particular rating (a lower deviation).
(*In practice, some albums can have several thousand ratings)
This album is rated in the top 1% of all albums on BestEverAlbums.com. This album has a Bayesian average rating of 81.2/100, a mean average of 80.1/100, and a trimmed mean (excluding outliers) of 81.3/100. The standard deviation for this album is 14.6.

More piano and ballad based than a lot of his other albums. But I've never heard a Nick Cave & the Bad Seeds album I didn't like. He's a true legend of the gothic croon. 'There is a Kingdom' & 'Idiot Prayer' being my track picks

Just hearing this in 2020 - almost hymn like songs. Not heard any other albums from him but based on this I will follow up on his albums

Just so beautiful. Not a dud song. Not even any songs below perfection.

Love laid bare. Cave makes his own blood on the tracks or maybe blood in the water would be more apt.

I take back my previous comment: while still not as good as Let Love In, this is a beautiful album and probably my second or third favourite by him.

Very pretty, and an uncharacteristically comfortable listen for a Nick Cave album. Good if the darkness of his other stuff turns you off.

Best album ever on my totally subjective list. Based on the memory of it the and now. My Age/the timing/albums quality and past musical eperience seems intermerged and impossible to distinguishe....

Lost or impossible love made into art.

No way in hell is this Nick Cave's best album, not even top 5. That says less about the quality of the album and more about how amazing his entire discography is, though.

Your feedback for The Boatman's Call