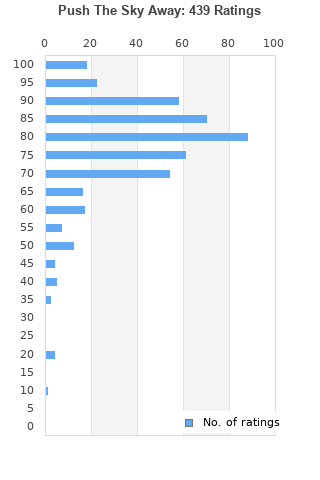 Push The Sky Away is ranked 4th best out of 27 albums by Nick Cave & The Bad Seeds on BestEverAlbums.com.

The best album by Nick Cave & The Bad Seeds is The Boatman's Call which is ranked number 381 in the list of all-time albums with a total rank score of 5,004. 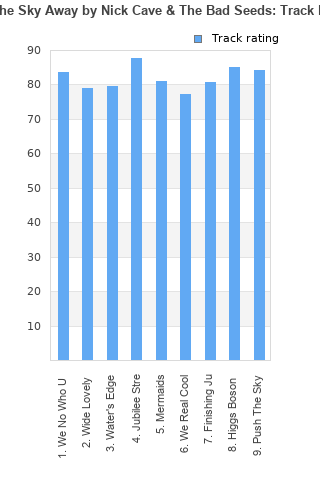 Push The Sky Away rankings

Push The Sky Away collection

Push The Sky Away ratings

Rating metrics: Outliers can be removed when calculating a mean average to dampen the effects of ratings outside the normal distribution. This figure is provided as the trimmed mean. A high standard deviation can be legitimate, but can sometimes indicate 'gaming' is occurring. Consider a simplified example* of an item receiving ratings of 100, 50, & 0. The mean average rating would be 50. However, ratings of 55, 50 & 45 could also result in the same average. The second average might be more trusted because there is more consensus around a particular rating (a lower deviation).
(*In practice, some albums can have several thousand ratings)
This album is rated in the top 3% of all albums on BestEverAlbums.com. This album has a Bayesian average rating of 78.4/100, a mean average of 77.6/100, and a trimmed mean (excluding outliers) of 78.5/100. The standard deviation for this album is 14.0.

Push The Sky Away favourites

Push The Sky Away comments

This album contains some of their best songs ever, that are really allowed to breathe and that creates a fantastic soundscape on this record. Its shocking at how great and unique this record is considering it is the groups 15th album so to still be so experimental and full of ideas is brilliant. It really is a testament to how great this group is and the quality they put out. The multi layering on this record is brilliant and the vast and varied instrumentation means there is something for everyone and each instrument shines in its own right. However, while this record does have some of the best songs from Cave it is not short of a few filler tracks mainly nearer the start. This is disappointing as it is only a 9 track album that is 42 minutes long so shouldn't really have this. Overall, a great record by Nick Cave & The Bad Seeds but it does fall a little short of their best work.

The secret to Nick Caves success has always been his ability to surround himself with the very best musicians and creative minds to make up his Bad Seeds entourage. A listing of past Seeds is quite literally a who's who's of contemporary alternative music:Mick Harvey , Blixa Bargeld , Hugo Race , ex partner Anita Lane , Kid Congo Powers , Roland Wolf , James Johnston and Ed Kuepper come quickly to mind . And so it goes 'Push The Sky Away ' is no exception . It is the band's first album not to feature founding member Mick Harvey but founding member Barry Adamson returns since 'Your Funeral... My Trial (1986)'and is the last album to feature Conway Savage prior to his death , plus there's Martyn Casey (Triffids) on Bass , Warren Ellis (The Dirty Three) on Fender Rhodes, Flute, Guitar (Tenor), Viola, Violin , Nick Launay as Engineer and Producer and would you believe THE Cat Stevens credited with Photography

The Nick Cave documentary '20,000 Days On Earth' is well worth checking out being free and available on YouTube. The documentary lifts the veil on some of the making of 'Push The Sky Away' as well offers a beautiful narration of Caves life up until that point by none other than Cave himself along with rare photos and footage not before seen by the public. There's even a Kylie Minogue appearance discussing 'that song' but more interestingly Michael Hutchence .Essential viewing for all Cave fans

I remember hearing from Nick Cave fans how disappointing or inconsistent this album was to previous efforts. For me, this album enabled me to listen to a whole Nick Cave album and then delve into his back catalogue to appreciate his other contributions.

Perfect album!!! One off the most underrated albums I have ever seen

Nick, dear Nick. The titlesong is on my top-10 ever songs. Such beauty..

I'm reading how many have called this 'a grower', so maybe my opinion will change. It just struck me as a little sparse. I like Nick Cave when he's messy - this is so understated. Maybe I'll come to appreciate it more...?

Not my kind of record, but you can feel it is good

The first time I heard, push the sky away, my initial reaction was, is that it? After repeated listens I realised the space and almost emptiness was the whole point. Nick Cave let's this album breathe. It moves slowly but it seeps into your soul and once it's got you, it won't let go. I now put, push the sky away, in the top three Nick Cave records. It's sublime, with, jubilee street, mermaids, and, we real cool, my favorites, with, wild lovely eyes, and, higgs boson blues, also great. A superb album from a man who just seems to get better and better.

Your feedback for Push The Sky Away