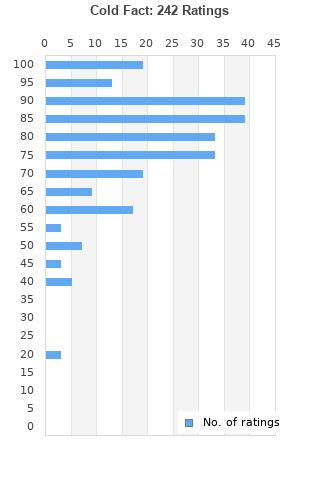 RODRIGUEZ Cold Fact (new and sealed cd)
Condition: Brand New
Time left: 2d 12h 5m 4s
Ships to: Worldwide
$31.00
Go to store
Product prices and availability are accurate as of the date indicated and are subject to change. Any price and availability information displayed on the linked website at the time of purchase will apply to the purchase of this product.  See full search results on eBay

Cold Fact is ranked as the best album by Rodriguez. 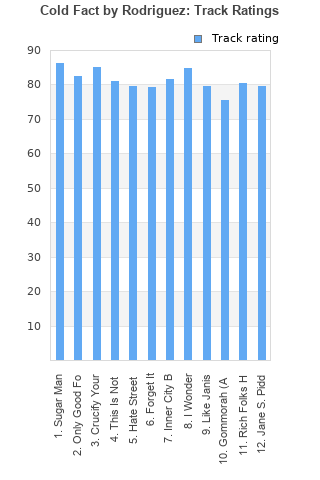 Rating metrics: Outliers can be removed when calculating a mean average to dampen the effects of ratings outside the normal distribution. This figure is provided as the trimmed mean. A high standard deviation can be legitimate, but can sometimes indicate 'gaming' is occurring. Consider a simplified example* of an item receiving ratings of 100, 50, & 0. The mean average rating would be 50. However, ratings of 55, 50 & 45 could also result in the same average. The second average might be more trusted because there is more consensus around a particular rating (a lower deviation).
(*In practice, some albums can have several thousand ratings)
This album is rated in the top 2% of all albums on BestEverAlbums.com. This album has a Bayesian average rating of 79.6/100, a mean average of 79.1/100, and a trimmed mean (excluding outliers) of 79.9/100. The standard deviation for this album is 15.0.

This album is absolutely brilliant. The lyrics are phenomenal. 10/10

Got to check this album out after watching the Sugar Man documentary on Netflix. Really good album, criminal that this didn't sell even remotely as well as it should have.

Well ain't this a hidden gem. The songs do feel like 1970 but the production feels 1960, which somehow works pretty well! The lyrics are consistently entertaining, and it all feels a little Bob Dylanish minus a harmonica.

Favorites: Sugar Man, Only Good for Conversation, Crucify Your Mind, I Wonder

Not the hidden treasure it has been purported to be. It's okay. "Cold Play" contains some rudimentary comparison to Dylan, James Taylor, Cat Stevens and other singer/songwriters of the time. I'm from the Southwest Detroit area where Rodriguez plied his trade. There are still plenty of street poets roaming the same streets where Rodriguez roamed. I don't find his lyrics that revelatory of 60-70s street life. What is most endearing about this album is the production and the contributions of the Funk Brothers second wave.

I heard the music before I saw the movie so I have a more unbiased view of the album, and I must say it deserves all the praise it gets. The songwriting is spectacular, and Rodriguez’s lyricism is on par with Bob Dylan’s. I especially love the forlorn imagery that the last song paints. I wonder how different music would be now if this was more popular back in the day. Also, a shame that Gamorrah is on this album as it is the only trash song he ever wrote.

One who should've been classic. Just like Forever Changes, massively underappreciated. Endless amound of masterpiece songs. Crucify your mind and Inner city blues are the best

This is awsome. Really fucking good.

I don't think it's the lost classic it's portrayed as by some. No I've not seen the film and watching that I'm sure helps you appreciate him more. I've been aware of him since David Holmes and andy votel had the first two tracks in their mixes, and both are fantastic cuts. Hate street dialogue and rich folks hoax are very good too. But I was expecting more considering that and the fact it features the funk brothers. Also it's nothing like Dylan. I can see the Donovan comparison though but if he'd had the same team play on his stuff from this period then I guess it would be a lot better. I think we can use the O word. I'm off to play some Donovan. Feel free to click unhelpful.

Like the rhythms of the inner city enclaves that permeate here, wish that prevailed over the Dylan imitations.

A favourite, like the movie said, for most white Saffies, myself included. But really NOT the soundtrack of the anti-apartheid movement. Most black South Africans had never heard of this guy.

Your feedback for Cold Fact