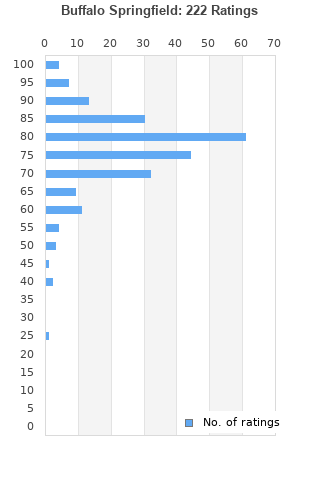 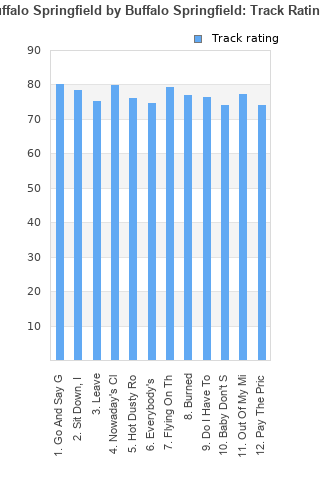 Rating metrics: Outliers can be removed when calculating a mean average to dampen the effects of ratings outside the normal distribution. This figure is provided as the trimmed mean. A high standard deviation can be legitimate, but can sometimes indicate 'gaming' is occurring. Consider a simplified example* of an item receiving ratings of 100, 50, & 0. The mean average rating would be 50. However, ratings of 55, 50 & 45 could also result in the same average. The second average might be more trusted because there is more consensus around a particular rating (a lower deviation).
(*In practice, some albums can have several thousand ratings)
This album is rated in the top 5% of all albums on BestEverAlbums.com. This album has a Bayesian average rating of 76.7/100, a mean average of 76.5/100, and a trimmed mean (excluding outliers) of 76.9/100. The standard deviation for this album is 10.8.

I think the first record by Buffalo Springfield is their finest. It's a fiery, collaborative effort by a true supergroup. As a Neil Young fan, I'm pleased with his originals here. They are bittersweet, catchy and cryptic. Stills' songs are complimentary. They are sweet, straightforward and fun. I prefer the mono version that can be found on the What's That Sound reissue, which includes the song "Baby Don't Scold Me," the original pressing track that was scrapped to include the new single "For What It's Worth," which became their most well known song.

Track Pick: For What It's Worth
Gems: Out of My Mind, Flying on the Ground, Clancey Can't Even Sing

Favourite song: For What It's Worth

This album contains some great guitar work and good vocals. The songwriting could use some work throughout the album. I don't find it to be particularly good anywhere but on "Burned" even though it sounds bad and "For What It's Worth" even though it's not on the original release. I think the songs are little too chorus driven and similar sounding. I didn't listen to "Baby, Don't Scold Me" because the second release is what's on Spotify.

Not sure if I like this original release rule... For What It's Worth is easily the best song, yet I can't rate it. The only other songs I liked on this was Leave and that was mostly because of the guitar (started out well and kinda fizzled for me). The other was pay the price.

Despite For What Its Worth, this isn't as strong as Again.

For What It's Worth is so associated with this album it's hard to think there was an original version of the album without it.

Your feedback for Buffalo Springfield