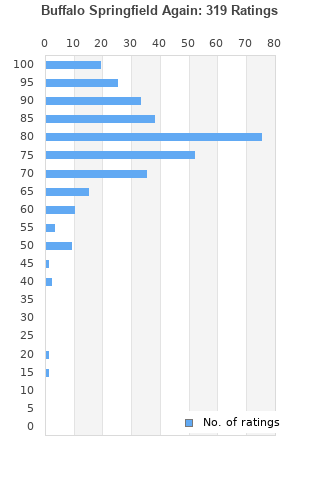 BUFFALO SPRINGFIELD BUFFALO SPRINGFIELD AGAIN 1967 PRESSING ATCO SD 33-226 LP
Condition: Used
Time left: 1d 6h 14m 53s
Ships to: Worldwide
$25.00
Go to store
Product prices and availability are accurate as of the date indicated and are subject to change. Any price and availability information displayed on the linked website at the time of purchase will apply to the purchase of this product.  See full search results on eBay 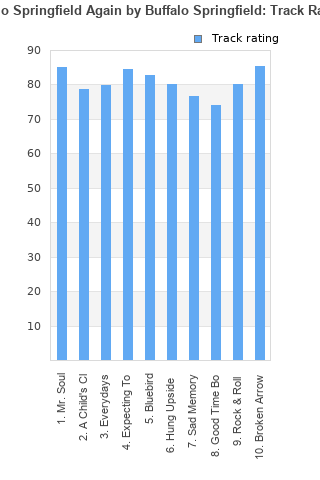 Rating metrics: Outliers can be removed when calculating a mean average to dampen the effects of ratings outside the normal distribution. This figure is provided as the trimmed mean. A high standard deviation can be legitimate, but can sometimes indicate 'gaming' is occurring. Consider a simplified example* of an item receiving ratings of 100, 50, & 0. The mean average rating would be 50. However, ratings of 55, 50 & 45 could also result in the same average. The second average might be more trusted because there is more consensus around a particular rating (a lower deviation).
(*In practice, some albums can have several thousand ratings)
This album is rated in the top 2% of all albums on BestEverAlbums.com. This album has a Bayesian average rating of 80.0/100, a mean average of 79.7/100, and a trimmed mean (excluding outliers) of 80.2/100. The standard deviation for this album is 12.7.

Great contributions from every member of the group. Fantastic guitar work and great songwriting. An eclectic collection of songs that fit well together, in my opinion.

Some really great songs on this album, although I can't say all the songs are equally memorable.

erhm. what do people have against good time boy? should be 80+ rated.

No doubts: this album is one of the best of the late 1960's. It has a pack of great tracks ("Mr. Soul", "Bluebird", Rock and Roll Woman" and "Broken Arrow"), along with a immense variability of music stiles

I fell deep into this one fairly recently. Probably the best album ever to have such a lame title

A good album that shows the emergence of Neil Young as a great songwriter.

This is a surprisingly good album; given that the band was falling apart.

Your feedback for Buffalo Springfield Again