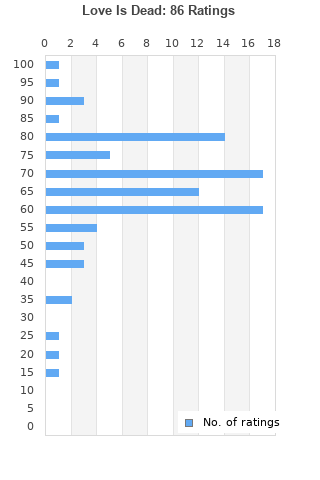 Love Is Dead is ranked 4th best out of 8 albums by CHVRCHES on BestEverAlbums.com.

The best album by CHVRCHES is The Bones Of What You Believe which is ranked number 1362 in the list of all-time albums with a total rank score of 1,293. 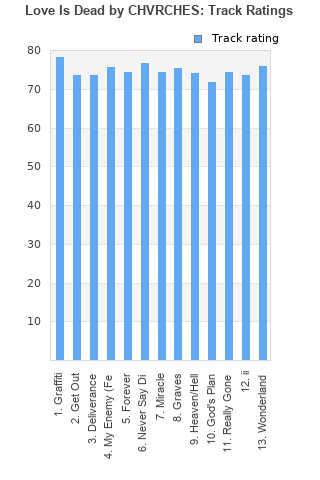 Rating metrics: Outliers can be removed when calculating a mean average to dampen the effects of ratings outside the normal distribution. This figure is provided as the trimmed mean. A high standard deviation can be legitimate, but can sometimes indicate 'gaming' is occurring. Consider a simplified example* of an item receiving ratings of 100, 50, & 0. The mean average rating would be 50. However, ratings of 55, 50 & 45 could also result in the same average. The second average might be more trusted because there is more consensus around a particular rating (a lower deviation).
(*In practice, some albums can have several thousand ratings)
This album has a Bayesian average rating of 67.2/100, a mean average of 65.3/100, and a trimmed mean (excluding outliers) of 66.5/100. The standard deviation for this album is 14.4.

With their first 2 records, CHVRCHES proved to me that they were a relatively fresh take on 80s synthpop aesthetic. Songs like 'Gun', 'We Sink', and 'Never Ending Circles' are witty, intricate, and pretty, mostly due to the band's clever production techniques and Lauren's poignant vocals.

Very little of what I have described is on this album whatsoever. The production is pretty--easy on the ears--but for every step they took toward accessibility, they took 2 or 3 steps backward in terms of the quality of songwriting and memorability of this record.

There are a few strides here -- Lauren has really honed in her voice and *sounds* the best she ever has, but unfortunately it came hand-in-hand with some really terrible lyrical choices. There were so many songs on this thing like 'Never Say Die', 'Get Out', and 'Forever' that had a lot of potential in the verses, only to squander them with totally redundant hooks...."Never-ever-ever-ever-ever say die." "Get-get-get-out, get-get-get-out..." "Forever-ever-ever-ever-ever-ever"... In addition, Miracle is the weakest song they've penned to date, built around an Imagine Dragons-sounding roaring chorus that simply has no place being in a CHVRCHES track.

It puzzles me that the band created this sort of record, seeing as Lauren has proven to be a solid lyricist in the past and the band has always been fairly protective of its artistic flexibility with production. But here, all the edges are smoothed out and the result is a really forgettable but somewhat enjoyable synthpop record. There are a few solid tracks where their talent still shines through (Graffiti and Graves, mainly) but most of these tracks are just incredibly stale and rely more on the booming bass in the production than actual songwriting.

Cracking poppy pop. They keep doing what they do best and it's great.

I love this band... but they are definitely trending downwards since the first full length. My bias keeps me from hating this album, but it is far from Their best.

Occasionally filled pop tropes, Love is dead is not as strong as its predecessors.

Your feedback for Love Is Dead