Future Me Hates Me (studio album) by The Beths Future Me Hates Me is ranked as the best album by The Beths. 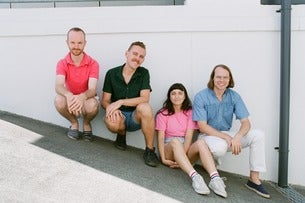 Future Me Hates Me rankings

Future Me Hates Me collection

Future Me Hates Me ratings

Rating metrics: Outliers can be removed when calculating a mean average to dampen the effects of ratings outside the normal distribution. This figure is provided as the trimmed mean. A high standard deviation can be legitimate, but can sometimes indicate 'gaming' is occurring. Consider a simplified example* of an item receiving ratings of 100, 50, & 0. The mean average rating would be 50. However, ratings of 55, 50 & 45 could also result in the same average. The second average might be more trusted because there is more consensus around a particular rating (a lower deviation).
(*In practice, some albums can have several thousand ratings)
This album is rated in the top 4% of all albums on BestEverAlbums.com. This album has a Bayesian average rating of 77.6/100, a mean average of 77.7/100, and a trimmed mean (excluding outliers) of 78.3/100. The standard deviation for this album is 10.0.

Future Me Hates Me favourites

Future Me Hates Me comments

Incredibly catchy indie rock/pop. Tight playing, clever lyrics, and extremely well written melodies. They have all the tools to be one of the great bands in their genre. Very much looking forward to their second LP Jump Rope Gazers next month.

I thought that this was a great album, one of my personal favorites of the 2010s! I was surprised this was a debut album, as most songs are fantastic, with really great, developed pop hooks and vocal melodies. Not every song is as fantastic as the best (I couldn't get into "Less Than Thou"), but it's much more consistent than the average album. My favorite tracks were (in order) "Not Running," "Great No One," "Future Me Hates Me," and "Happy Unhappy." The lyrics are also pretty clever, and the songs each feel distinct enough to stand on their own but have the same power poppy sound.

Your feedback for Future Me Hates Me