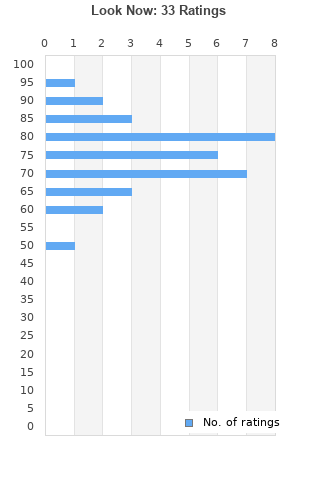 Look Now is ranked as the best album by Elvis Costello & The Imposters. 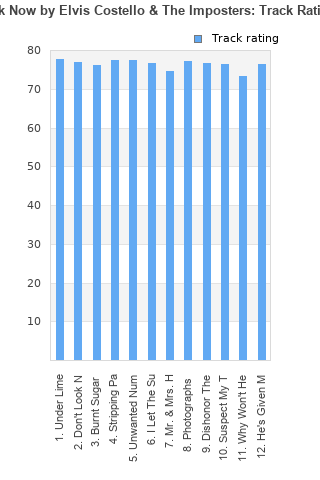 Rating metrics: Outliers can be removed when calculating a mean average to dampen the effects of ratings outside the normal distribution. This figure is provided as the trimmed mean. A high standard deviation can be legitimate, but can sometimes indicate 'gaming' is occurring. Consider a simplified example* of an item receiving ratings of 100, 50, & 0. The mean average rating would be 50. However, ratings of 55, 50 & 45 could also result in the same average. The second average might be more trusted because there is more consensus around a particular rating (a lower deviation).
(*In practice, some albums can have several thousand ratings)
This album is rated in the top 18% of all albums on BestEverAlbums.com. This album has a Bayesian average rating of 74.7/100, a mean average of 75.2/100, and a trimmed mean (excluding outliers) of 75.2/100. The standard deviation for this album is 9.5.

I am a big fan of the first two Elvis Costello (and The Attractions) albums, in his later work he is discovering a lot of different and new genres, which didn't get to me as much as My Aim is True.

The first listening of this album was hard and honestly, I didn't really liked. Found the courage to listend to the album for a second time and liked it way more. It gets definitely better wit repeated listenings. I really enjoy Elvis' song in the more soul songs, didn't expect it be this good!

First album of brand new material from Elvis for eight years. Leading up to the release of the album talk has been about the record being a meeting of, Imperial bedroom, and, Painted from memory, and I can see that but it's the latter it's closer too for me. Opener, Under lime, is great and sets the tone and feel for the rest of the album. In truth it's a typical, latter day, Elvis Costello lp. Sophisticated pop with those typical Costello lyrics, very adult and very good although a little short on surprises. Still good to have the great man back especially after his recent cancer scare. Very good and will probably get even better with repeated listenings.

Your feedback for Look Now