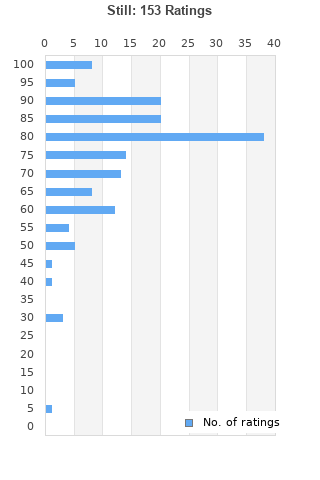 Still is ranked 4th best out of 12 albums by Joy Division on BestEverAlbums.com.

The best album by Joy Division is Unknown Pleasures which is ranked number 36 in the list of all-time albums with a total rank score of 28,850. 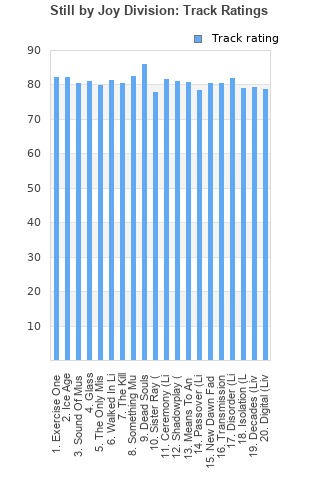 Rating metrics: Outliers can be removed when calculating a mean average to dampen the effects of ratings outside the normal distribution. This figure is provided as the trimmed mean. A high standard deviation can be legitimate, but can sometimes indicate 'gaming' is occurring. Consider a simplified example* of an item receiving ratings of 100, 50, & 0. The mean average rating would be 50. However, ratings of 55, 50 & 45 could also result in the same average. The second average might be more trusted because there is more consensus around a particular rating (a lower deviation).
(*In practice, some albums can have several thousand ratings)
This album is rated in the top 4% of all albums on BestEverAlbums.com. This album has a Bayesian average rating of 77.4/100, a mean average of 76.2/100, and a trimmed mean (excluding outliers) of 77.7/100. The standard deviation for this album is 15.3.

A superb collection of Joy Division unreleased tracks , "Glass" which previously appeared on the 'Factory Sample' album , a live Velvet Underground cover "Sister Ray" ( off their 1968 album 'White Light/White Heat' ) and a live recording of Joy Divisions final ever concert at Birmingham University May 2 1980

The unreleased stuff is great, the live material is mediocre

The studio outtakes are mostly very good songs which could have made it onto regular albums. I particularly enjoy Ice Age and Something Must Break.

I also think Sister Ray cover captures the spirit of the original.

The concert is standard bad quality and technical problems, but you can't forget the fact that this is their last, so it has some special significance.

A brilliant Joy Division compilation. Exercise One and Sound Of Music are my favourites from this album.

The sessions could have been album takes and the live recordings are powerful and exciting. Essential Joy Division material.

Your feedback for Still