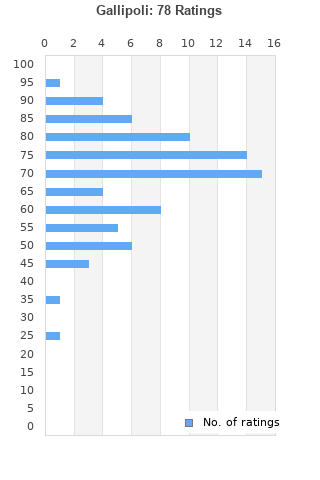 BEIRUT - GALLIPOLI NEW CD
Condition: Brand New
Time left: 1d 2h 36m 16s
Ships to: Worldwide
$14.66
Go to store
Product prices and availability are accurate as of the date indicated and are subject to change. Any price and availability information displayed on the linked website at the time of purchase will apply to the purchase of this product.  See full search results on eBay

Gallipoli is ranked 7th best out of 7 albums by Beirut on BestEverAlbums.com.

The best album by Beirut is The Flying Club Cup which is ranked number 1475 in the list of all-time albums with a total rank score of 1,170. 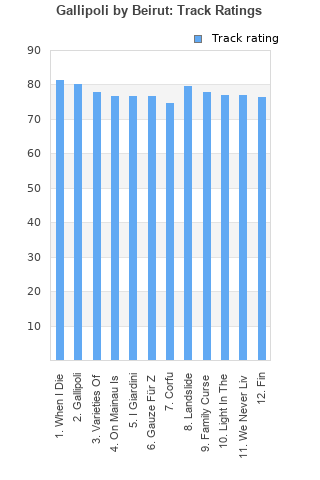 Rating metrics: Outliers can be removed when calculating a mean average to dampen the effects of ratings outside the normal distribution. This figure is provided as the trimmed mean. A high standard deviation can be legitimate, but can sometimes indicate 'gaming' is occurring. Consider a simplified example* of an item receiving ratings of 100, 50, & 0. The mean average rating would be 50. However, ratings of 55, 50 & 45 could also result in the same average. The second average might be more trusted because there is more consensus around a particular rating (a lower deviation).
(*In practice, some albums can have several thousand ratings)
This album has a mean average rating of 69.0/100. The trimmed mean (excluding outliers) is 69.7/100. The standard deviation for this album is 13.7.

Indeed enjoyable, less folky than previous work. Didn't really got to me in the first two listens but is definitely worth to check out often!

The band of American Indie Pop folk Beirut is back with "Gallipoli". I was never a fan of Beirut, I thought their had cool songs like "Nantes" or "Elephant Gun". Their first two albums "Gulag Orkestar" and "The Flying Club Cup" were successful. The band was quite innovative as it included fanfare elements and accordions in their songs. But I find that for some time Beirut has lost his originality and is now a basic indie pop band. "Gallipoli" is not a bad album, but it lacks originality, renewal for the band.

Great record. Blending of all the various influences and styles is terrific. Completely enjoyable.

Your feedback for Gallipoli