Wish You Were Here (studio album) by Badfinger 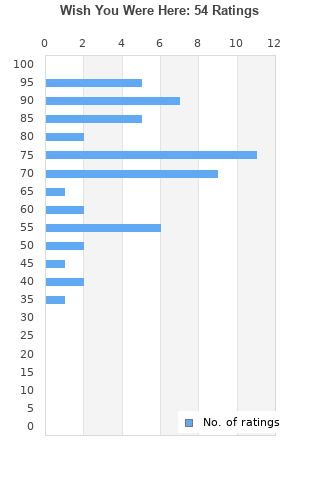 Wish You Were Here is ranked 3rd best out of 16 albums by Badfinger on BestEverAlbums.com.

The best album by Badfinger is Straight Up which is ranked number 2219 in the list of all-time albums with a total rank score of 734. 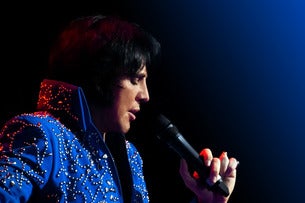 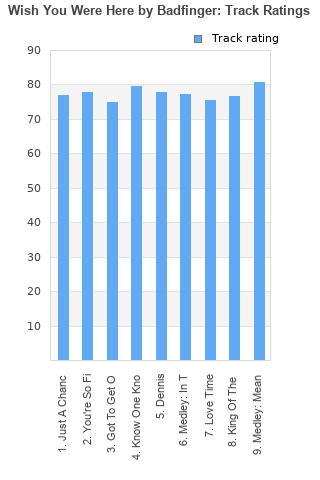 Wish You Were Here rankings

Wish You Were Here collection

Wish You Were Here ratings

Rating metrics: Outliers can be removed when calculating a mean average to dampen the effects of ratings outside the normal distribution. This figure is provided as the trimmed mean. A high standard deviation can be legitimate, but can sometimes indicate 'gaming' is occurring. Consider a simplified example* of an item receiving ratings of 100, 50, & 0. The mean average rating would be 50. However, ratings of 55, 50 & 45 could also result in the same average. The second average might be more trusted because there is more consensus around a particular rating (a lower deviation).
(*In practice, some albums can have several thousand ratings)
This album has a Bayesian average rating of 73.1/100, a mean average of 73.1/100, and a trimmed mean (excluding outliers) of 73.1/100. The standard deviation for this album is 15.7.

Wish You Were Here favourites

Wish You Were Here comments

In my opinion, Badfinger's best record. Great, great songs from each members, all great singers and composers. Some of the most inspired work they've made. We're not getting jam-songs here. It's still power pop but has some element of prog to it. Usually I don't care much for Joey Molland's compositions but "Got To Get Out Of Here" is one of my favorites on the album. Please give this album a listen if you're into some cool mid-70s power pop.

A great record from a almost forgotten band. They were very underrated in their day and still are.

Badfinger's second album for Warner Brothers was recording during two sessions - the first took place at The Caribou Ranch, Colorado in April/May 1974; the second at AIR studios, London in June. Though financial worries had begun to have great influence on the 4 members; they all felt that they had to put everything they had into these recordings. And this really shows on the album - another masterpiece - one of the really great albums of the seventies. It has been called "The Sergent Pepper of the 1970's"; personally I feel that it has more in common with "Abbey Road".

Badfinger had grown into an albums-band, and this album really works as a whole, especially the original side 2 which features two very succesful medleys. The album opens with Pete's very powerful "Just A Chance" and with Mike's light and catchy "You're So Fine" song by Joey and Pete - once again Mike proves himself as a competent songwriter. Joey's "Got To Get Out Of Here" really shows how Joey felt about about the music business and being in the band ( as we know he left shortly after the album's release) a very strong song by Joey. "Know One Knows" is another powerful melodic rocker by Pete - I love the Japanese voice that meddles with leadguitar part. The first side closes with another grand production which characterizes most of the album; Pete's Dennis written to his step-son. Besides the two medleys side two features Tom Evans' "King Of The Load" ( one of my favourite Tom Evans songs) and Joey's quiet Love Time. No singles were released from the album; this was a period when hit-singles didn't matter much to the progressive/ambitious bands. "Just a Chance" or "Know One Knows" might have been able to make the charts with the right promotion, though none of them have immediate hit-potential.

My favourites: Just a Chance, Know One Knows, Dennis, King Of The Load and Meanwhile Back at the Ranch

Your feedback for Wish You Were Here