On The Line (studio album) by Jenny Lewis 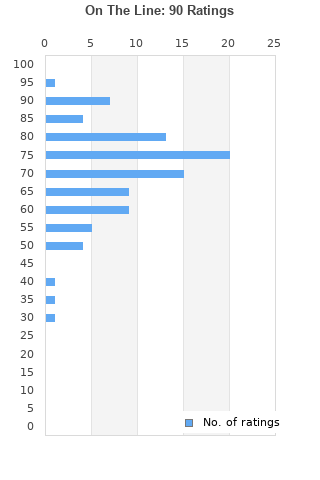 JENNY LEWIS On The Line Don Was Jim Keltner Ryan Adams BLUE vinyl SEALED LP
Condition: New
Time left: 1d 11h 24m 9s
Ships to: Worldwide
$49.97
Go to store
Product prices and availability are accurate as of the date indicated and are subject to change. Any price and availability information displayed on the linked website at the time of purchase will apply to the purchase of this product.  See full search results on eBay

On The Line is ranked as the best album by Jenny Lewis. 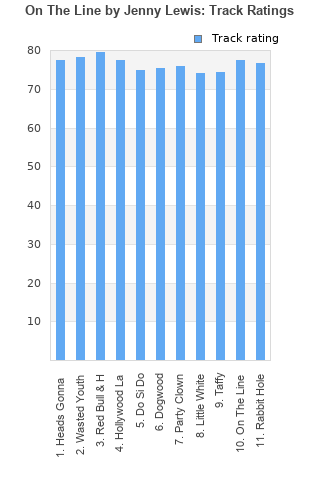 On The Line rankings

On The Line collection

On The Line ratings

Rating metrics: Outliers can be removed when calculating a mean average to dampen the effects of ratings outside the normal distribution. This figure is provided as the trimmed mean. A high standard deviation can be legitimate, but can sometimes indicate 'gaming' is occurring. Consider a simplified example* of an item receiving ratings of 100, 50, & 0. The mean average rating would be 50. However, ratings of 55, 50 & 45 could also result in the same average. The second average might be more trusted because there is more consensus around a particular rating (a lower deviation).
(*In practice, some albums can have several thousand ratings)
This album has a Bayesian average rating of 71.4/100, a mean average of 70.6/100, and a trimmed mean (excluding outliers) of 71.2/100. The standard deviation for this album is 12.9.

On The Line favourites

On The Line comments

'On The Line' tells the chronological tale in song of heartbreak , with ultimate rebirth and happiness and everything that happens in between. It is also worth noting JL lost her mother to liver cancer whilst writing this album which certainly impacted the lyrics

Musically it's an all star cast featuring Ryan Adams (yew) on piano, guitar and as producer , Beck on keyboards, organ, piano, producer, synthesizer ,vocals and a young fellow by the name of Ringo Starr whom you may have heard of - just to name a few

Well worth your time

Superb songcraft as usual. Her best yet? Too soon to tell but I wouldn't dismiss the idea.

I can't believe I'm going to say this, but I think I might love this album more than Voyager. It's more consistent, the slower songs are lush and the bangers are vibrant and bright. Sounds like springtime. As a Minnesotan, I can really appreciate that right now as all the snow melts away.

Your feedback for On The Line