Good At Falling (studio album) by The Japanese House 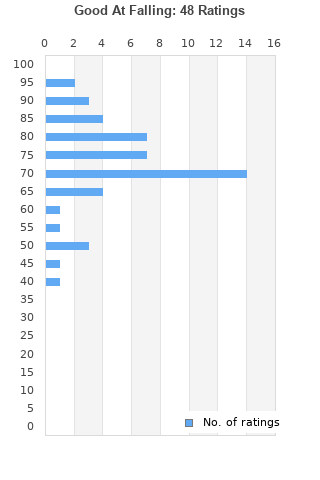 The Japanese House - Good At Falling - Limited Edition (NEW 2 VINYL LP)
Condition: New
Time left: 2d 20h 54m 11s
Ships to: Worldwide
£24.14
Go to store
Product prices and availability are accurate as of the date indicated and are subject to change. Any price and availability information displayed on the linked website at the time of purchase will apply to the purchase of this product.  See full search results on eBay 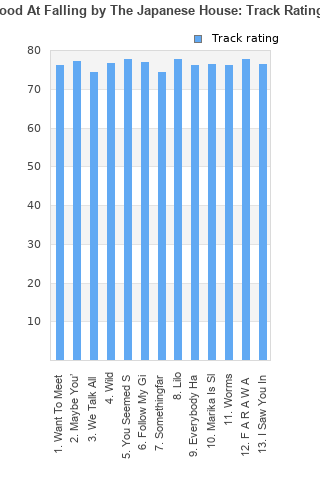 Rating metrics: Outliers can be removed when calculating a mean average to dampen the effects of ratings outside the normal distribution. This figure is provided as the trimmed mean. A high standard deviation can be legitimate, but can sometimes indicate 'gaming' is occurring. Consider a simplified example* of an item receiving ratings of 100, 50, & 0. The mean average rating would be 50. However, ratings of 55, 50 & 45 could also result in the same average. The second average might be more trusted because there is more consensus around a particular rating (a lower deviation).
(*In practice, some albums can have several thousand ratings)
This album has a Bayesian average rating of 72.0/100, a mean average of 71.8/100, and a trimmed mean (excluding outliers) of 71.8/100. The standard deviation for this album is 12.9.

I was expecting more variation, after the first half became a bit boring.

A little bit too long and a bit too much Vocoder work. Other than that, a really nice, atmospheric pop album.

The Japanese House is the solo project of Amber Bain, an English girl who has made a name for herself thanks to her elegant synthpop. Produced by Amber Bain herself and George Daniel (drummer of The 1975), "Good At Falling" continues without surprise in the same way, honest, simple and with a little too much autotune in the voice. This debut album is nice but unfortunately misses sparks to make a major work in the current music. The record would have won to be less long and artificial. The compositions of Amber Bain are still treated and some are catchy and haunting.

Your feedback for Good At Falling