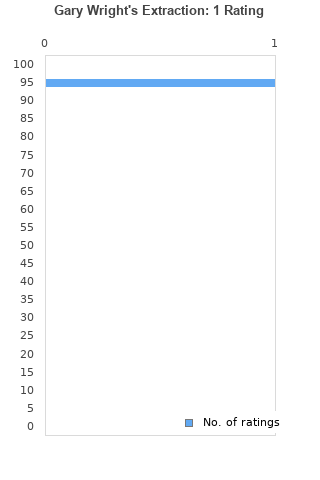 Gary Wright's Extraction is ranked - best out of 5 albums by Gary Wright on BestEverAlbums.com.

The best album by Gary Wright is The Dream Weaver which is ranked number 30168 in the list of all-time albums with a total rank score of 25.

No tracks have been rated on this album yet.
#
Track
Rating/Comments
1.
Got On The Right Road
Rating: Not enough dataComments:

0
2.
Get Hold Of Yourself
Rating: Not enough dataComments:

0
5.
I Know A Place
Rating: Not enough dataComments:

0
7.
Over You Now
Rating: Not enough dataComments:

0
8.
Too Late To Cry
Rating: Not enough dataComments:

0
9.
I've Got A Story
Rating: Not enough dataComments:

Gary's first solo album after leaving Spooky Tooth. Spooky Tooth was alongside Hendrix and Led Zeppelin, doing late '60s hard rock that was an important root of heavy metal. Extraction is a little softer and with inspirational messages, though still much heavier than Gary's third solo album, his commercial breakthrough, The Dream Weaver. He wrote all the songs on Extraction, two of them with his American session guitarist Hugh McCracken. I think the singing and playing is excellent. Gary plays keyboard as well as he sings and he's said that he listened to blues singers e.g Bobby "Blue" Bland, which is noticable in his voice. I think both he and his ex-Spooky Tooth, co-lead singer, Englishman Mike Harrison, have/had distinctive, recognizable voices. So I'd say the album is a mix of hard, pre-metal rock, blues, soul, funk, gospel, maybe a little country.

Your feedback for Gary Wright's Extraction