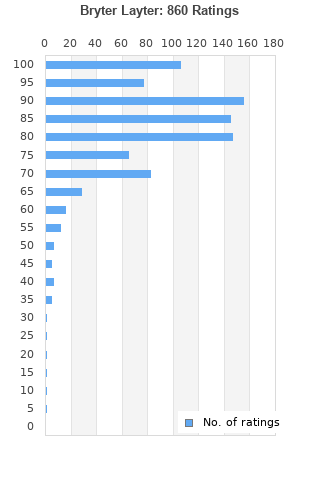 Nick Drake : Bryter Layter - CD on Island Records - 1970 - Psych Loner Folk
Condition: Very Good
Time left: 9h 35m 3s
Ships to: Worldwide
£6.99
Go to store
Product prices and availability are accurate as of the date indicated and are subject to change. Any price and availability information displayed on the linked website at the time of purchase will apply to the purchase of this product.  See full search results on eBay

Bryter Layter is ranked 3rd best out of 10 albums by Nick Drake on BestEverAlbums.com.

The best album by Nick Drake is Pink Moon which is ranked number 51 in the list of all-time albums with a total rank score of 24,305. 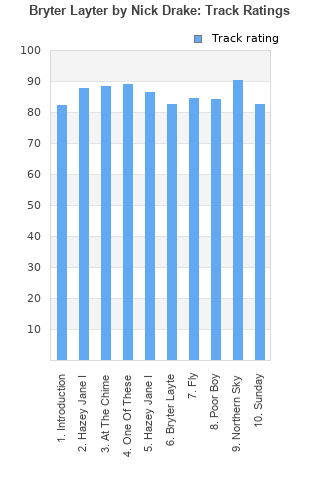 One Of These Things First
Rating: 89 (194 votes)Comments:

Rating metrics: Outliers can be removed when calculating a mean average to dampen the effects of ratings outside the normal distribution. This figure is provided as the trimmed mean. A high standard deviation can be legitimate, but can sometimes indicate 'gaming' is occurring. Consider a simplified example* of an item receiving ratings of 100, 50, & 0. The mean average rating would be 50. However, ratings of 55, 50 & 45 could also result in the same average. The second average might be more trusted because there is more consensus around a particular rating (a lower deviation).
(*In practice, some albums can have several thousand ratings)
This album is rated in the top 1% of all albums on BestEverAlbums.com. This album has a Bayesian average rating of 83.8/100, a mean average of 82.9/100, and a trimmed mean (excluding outliers) of 83.9/100. The standard deviation for this album is 13.5.

I feel myself in good hands when i her the voice of Nick Drake on this album very relaxing and loving sounds.

Coming to this after Five Leaves and Pink Moon. It is certainly more accompanied instruments and backing vocals, Agree with Burttheswimmer about the backing vocals on Poor Boy - although I do really like the song - I had to check if he wrote it or pulled it from elsewhere because that wasn't like any backing I'd heard from him before.
This album must have influenced Belle & Sebastion with Hazy Jane II sounding so like them.
Good album from a sadly under estimated and short lived artist

Much more heavily produced than the other two albums, but still full of classics. Northern Sky is truly special, but the Hazy Janes and At The Chime of a City Clock are equal to many Five Leaves songs. It's only Poor Boy that feels a bit of a let down to me with its strange backing chorus that seems to belong to another artist.

This album is proof that Nick Drake's musical career is flawless. Despite it being considered Nick's "worst" album, all of the tracks on this album are still of great quality. It's often regarded as "overproduced" but the sound is truly perfect on tracks like City Clock and Northern Sky

Astonishing. How this man didn't get the accolades he deserved during his lifetime is beyond me. Such a shame.

This songwriter really knows how to make beatiful songs. Bryter Layter carries a sentiment of happiness and hope, and Nick Drake here seems confortable with the production around him. This is another masterful work on Nick's perfect discography.

Incredible album. Hazey Jane II is such an underrated song. Took me a while to get into but a very rewarding listen.

Your feedback for Bryter Layter