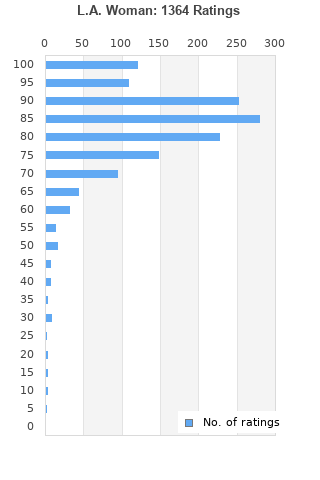 L.A. Woman is ranked 2nd best out of 44 albums by The Doors on BestEverAlbums.com.

The best album by The Doors is The Doors which is ranked number 30 in the list of all-time albums with a total rank score of 33,064. 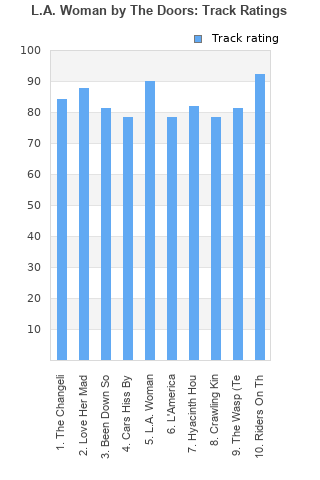 Rating metrics: Outliers can be removed when calculating a mean average to dampen the effects of ratings outside the normal distribution. This figure is provided as the trimmed mean. A high standard deviation can be legitimate, but can sometimes indicate 'gaming' is occurring. Consider a simplified example* of an item receiving ratings of 100, 50, & 0. The mean average rating would be 50. However, ratings of 55, 50 & 45 could also result in the same average. The second average might be more trusted because there is more consensus around a particular rating (a lower deviation).
(*In practice, some albums can have several thousand ratings)
This album is rated in the top 1% of all albums on BestEverAlbums.com. This album has a Bayesian average rating of 82.9/100, a mean average of 81.9/100, and a trimmed mean (excluding outliers) of 83.0/100. The standard deviation for this album is 13.3.

A couple of good tracks and then just some derivative blues. Jim Morrison sings like he has already checked out.

Their best output since debut, really enjoyable album and their sound changed in the 70s what we could see at Morrisson Hotel, but here it comes fully changed. Even tough there are some mediocre tracks, the vast majority is well crafted and Riders On The Storm is all-time great.

I dig this album because of the bluesy touches on many tracks.
The eerie Riders is astounding, moody and cool.
I think this is their best album.

Title track being the cream of the crop of this album. Not as strong an album as some of their others but still good. Couple of fillers but L'America & Hyacinth House are hidden gems that grow on me

I started to like this album long after the first listen. It seemed unoriginal and too different from the Doors style I was used to. Well, it's very difficult for a band to be original by playing the usual 3 blues chords, unless the singer has a perfectly suited voice like that of Jim Morrison. Now, whenever I feel like hearing that voice, that's the Doors album I have to listen to.

I think this album is overrated. L.A. Woman, Love Her Madly and Riders on the storm lift this album from average to good.

I don't consider this their best due to lack of consistency, but the presence of "Riders on the Storm"makes it a must listen for everyone.Overall, 75/100.

Your feedback for L.A. Woman