Who's Next (studio album) by The Who 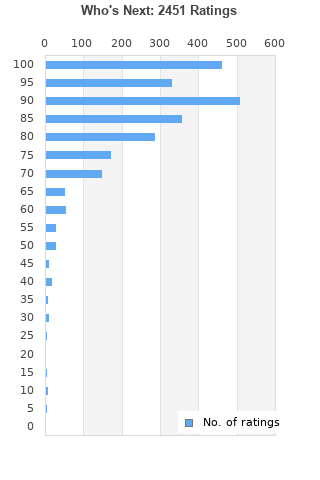 Who's Next is ranked as the best album by The Who. 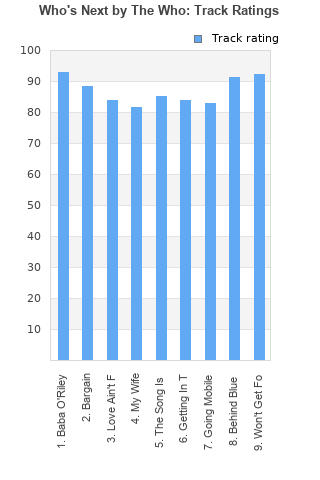 Rating metrics: Outliers can be removed when calculating a mean average to dampen the effects of ratings outside the normal distribution. This figure is provided as the trimmed mean. A high standard deviation can be legitimate, but can sometimes indicate 'gaming' is occurring. Consider a simplified example* of an item receiving ratings of 100, 50, & 0. The mean average rating would be 50. However, ratings of 55, 50 & 45 could also result in the same average. The second average might be more trusted because there is more consensus around a particular rating (a lower deviation).
(*In practice, some albums can have several thousand ratings)
This album is rated in the top 1% of all albums on BestEverAlbums.com. This album has a Bayesian average rating of 86.3/100, a mean average of 85.4/100, and a trimmed mean (excluding outliers) of 86.3/100. The standard deviation for this album is 13.7.

I absolutely detest the cover. Is this the best they could come up with at that immature time in their lives? However, that off my chest, the music makes up for the cover. Won’t Get Fooled Again is a personal favourite. My favourite album by The Who has to be the psychedelic one!

A brilliant rock album that shows that the 1970s era of the band is going to be different from what preceded it and I firmly believe it is to the betterment of the band.

The first album I ever bought from F.L.Moore in Luton. Still enjoy listening to it.

Very good classic rock album, excellent tunes. I love Baba O'Riley especially at the end, of course Won't Get Fooled Again is great. Behind Blue Eyes is another beautiful one on the same level as The Song Is Over. Overall very good album.

Surely one of the albums with the best opening and closing tracks ever? The other 8 tracks are nice but nothing too special. Highlights are Baba O'Riley, Won't Get Fooled Again, The Song is Over.

This is one of the first vinyls that I fully wore out. This is rock music at a point that everyone can reach. Behind Blue Eyes into Won't Get Fooled Again is one of the best turns to end an album in classic rock history.

"Who's Next" is The Who at their best. As good as a few of the other Who albums were, the operas as well, they never really matched or surpassed this one, in quality or rock potency. There are no filler songs on Who's Next, as all of them are amazing. It's easily one of the best albums of the classic rock era.

From start to finish great song after great song , nothing to conceptual or experimental but just well skilled and produced, fantastic vocals from Daltrey. Probably there best album for me although I do love quadrophenia

Your feedback for Who's Next