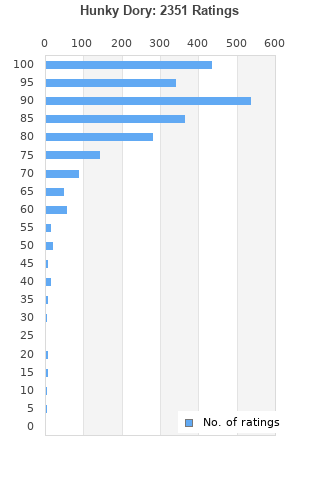 Hunky Dory is ranked 2nd best out of 88 albums by David Bowie on BestEverAlbums.com.

The best album by David Bowie is The Rise And Fall Of Ziggy Stardust And The Spiders From Mars which is ranked number 9 in the list of all-time albums with a total rank score of 57,889. 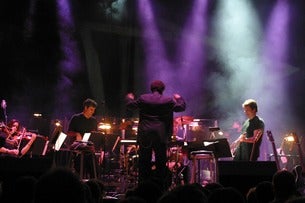 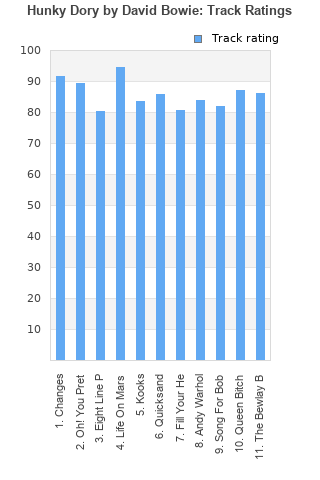 Rating metrics: Outliers can be removed when calculating a mean average to dampen the effects of ratings outside the normal distribution. This figure is provided as the trimmed mean. A high standard deviation can be legitimate, but can sometimes indicate 'gaming' is occurring. Consider a simplified example* of an item receiving ratings of 100, 50, & 0. The mean average rating would be 50. However, ratings of 55, 50 & 45 could also result in the same average. The second average might be more trusted because there is more consensus around a particular rating (a lower deviation).
(*In practice, some albums can have several thousand ratings)
This album is rated in the top 1% of all albums on BestEverAlbums.com. This album has a Bayesian average rating of 87.2/100, a mean average of 86.3/100, and a trimmed mean (excluding outliers) of 87.3/100. The standard deviation for this album is 13.0.

Changes is for me a near perfect song. Love it. The best in this album, just ahead of Life on Mars. The latter half makes this the 3. best Bowie imo, but that isn't a bad achievement.

David Bowie often showed his sparkling best throughout his career but I believe this is his magnum opus. The first half is loaded with brilliant hits that rank among his best and 'Life On Mars' stands as one of the greatest songs of all time. The second half adds a lot of depth and shows off his songwriting prowess to create one of the finest albums of all time..

I'm really not fond of Changes, but most of the songs are really great, well, in terms of vocal melodies and compositions at least. Life on Mars, Quicksand and Bewlay Brothers are my favorites.

Found this a bit inconsistent. Half of the tracks are great (Changes, Oh You Pretty Things, Life On Mars, Kooks, Andy Warhol and Queen Bitch) but the others are very forgettable. Certainly worth a listen though on the whole.

Great Bowie record showing his versatility and strong voice. I am not a huge Changes fan but I really like Oh you Pretty Things and Life On Mars? is just awesome, one of best ever made. Kooks and Fill Your Heart are average for me and I don't care for Andy Warhol. I kinda enjoy Song For Bob Dylan. Queen B*tch sounds very punk for 1971 - revolutionary in some way. The Bawley Brothers is excellent ending. The only track I don't like at all is Eight Line Poem.

Easily the best Bowie album. There are though some average tracks (Song For Bob Dylan is what I'm not kind of, also Kooks and Fill Your Heart aren't the biggest tracks here), but the best tracks carry out some weaknesses. Life On Mars? is my favourite song ever, Quicksand and The Bewlay Brothers are outstanding tracks with certain mood each. The first two tracks are light and have that very british piano sound. Andy Warhol may be considered one of the low points here by one, but for me this crazy lo-fi sounding shit is awesome. Queen Bitch is also a great track, but Suffragette City I think is his best hard rock thing
This is really worth listening album. It may be not as big sounding as his next albums, but Hunky Dory is a wonderful music-hall disk.

There are four top numbers carrying this album the rest are average really.

I live in a strange headspace where I consider THIS, not Ziggy Stardust, to be Bowie's Magnum Opus.

Your feedback for Hunky Dory