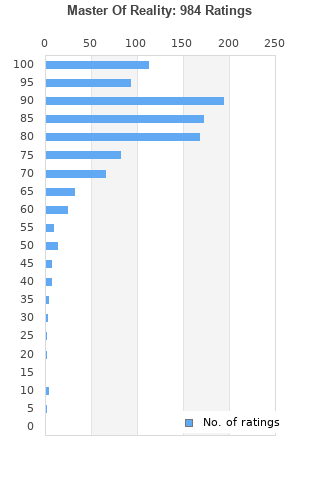 BLACK SABBATH MASTER OF REALITY Vinyl LP BS-2562 Embossed Cover 1971 Ozzy EX+VG
Condition: Used
Time left: 1h 56m 18s
Ships to: Worldwide
$31.00
Go to store
Product prices and availability are accurate as of the date indicated and are subject to change. Any price and availability information displayed on the linked website at the time of purchase will apply to the purchase of this product.  See full search results on eBay

Master Of Reality is ranked 3rd best out of 40 albums by Black Sabbath on BestEverAlbums.com.

The best album by Black Sabbath is Paranoid which is ranked number 64 in the list of all-time albums with a total rank score of 22,221. 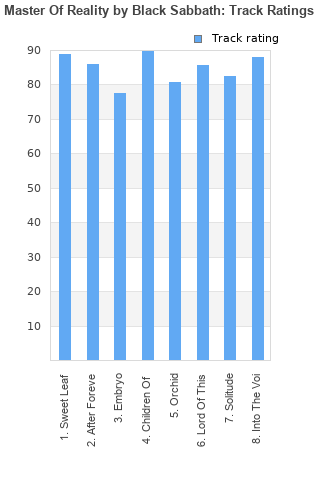 Rating metrics: Outliers can be removed when calculating a mean average to dampen the effects of ratings outside the normal distribution. This figure is provided as the trimmed mean. A high standard deviation can be legitimate, but can sometimes indicate 'gaming' is occurring. Consider a simplified example* of an item receiving ratings of 100, 50, & 0. The mean average rating would be 50. However, ratings of 55, 50 & 45 could also result in the same average. The second average might be more trusted because there is more consensus around a particular rating (a lower deviation).
(*In practice, some albums can have several thousand ratings)
This album is rated in the top 1% of all albums on BestEverAlbums.com. This album has a Bayesian average rating of 83.5/100, a mean average of 82.7/100, and a trimmed mean (excluding outliers) of 83.6/100. The standard deviation for this album is 13.5.

There are definitely some great songs, just not enough of them to put this in the top tier as an album.

Extremely heavy. Definitely in their top 3, when I am in the mood, this can even surpass "Black Sabbath" as my favorite album by them.

Love this. One of my favorite Sabbath albums. The heaviness is sublime. The instrumentals show a sensitive (?) side to the music as does the song 'Solitude'. Great mix is what makes it work for me. Standout track - the under rated 'After Forever'

It's a stoner rock album, it's a psychedelic rock album, it's a progressive rock album, it's a heavy metal album, and it's an effing trippy album. All the performers are playing their instruments to the highest point anyone can play them. There is not a single flaw all across the 35 minutes of intense music they provided.
Just board the bass line and close your eyes and let the graphics flow in. It will take you to one of the most intense and beautiful trips you'll ever go!

Nice to hear, good songs especially Children of the Grave and Into the Void.

Black Sabbath really took heavy rock to another level with this album, setting the standard for all future rockers to come! A really enjoyable album.

This album has 5 actual tracks, 2 instrumentals, and 1 trippy thing that I usually like to forget. The 5 genuine tracks are absolutely amazing, the 2 instrumentals serve their purpose well and provide nice contrast that still fits with the album, and that 1 trippy song (Solitude) is still pretty good, but not nearly as good as Planet Caravan. Iommi took his deep, heavy sound and somehow made it deeper/heavier. This album provides such a distinguishable mood and atmosphere that I can't help but give it a 10 even though I don't consider it entirely perfect.

Your feedback for Master Of Reality