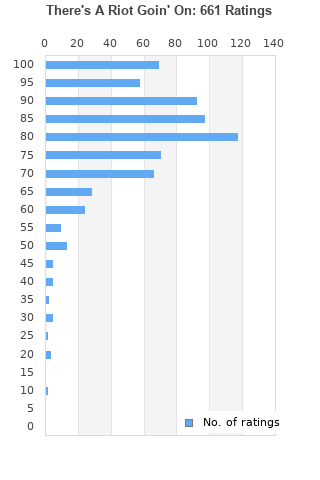 There's a Riot Goin' On by Sly & the Family Stone (CD, Oct-1990, Sony Music.)
Condition: Very Good
Time left: 5h 32m 25s
Ships to: Worldwide
$6.99
Go to store
Product prices and availability are accurate as of the date indicated and are subject to change. Any price and availability information displayed on the linked website at the time of purchase will apply to the purchase of this product.  See full search results on eBay

There's A Riot Goin' On is ranked as the best album by Sly & The Family Stone.

Listen to There's A Riot Goin' On on YouTube 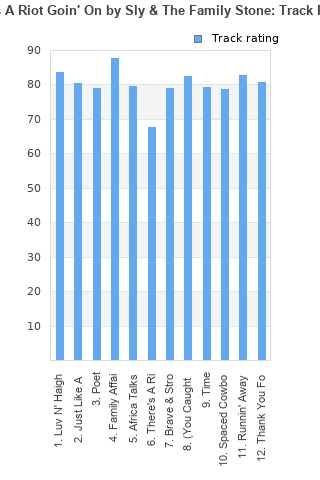 There's A Riot Goin' On rankings

There's A Riot Goin' On collection

There's A Riot Goin' On ratings

Rating metrics: Outliers can be removed when calculating a mean average to dampen the effects of ratings outside the normal distribution. This figure is provided as the trimmed mean. A high standard deviation can be legitimate, but can sometimes indicate 'gaming' is occurring. Consider a simplified example* of an item receiving ratings of 100, 50, & 0. The mean average rating would be 50. However, ratings of 55, 50 & 45 could also result in the same average. The second average might be more trusted because there is more consensus around a particular rating (a lower deviation).
(*In practice, some albums can have several thousand ratings)
This album is rated in the top 1% of all albums on BestEverAlbums.com. This album has a Bayesian average rating of 81.4/100, a mean average of 80.6/100, and a trimmed mean (excluding outliers) of 81.6/100. The standard deviation for this album is 14.5.

There's A Riot Goin' On favourites

There's A Riot Goin' On comments

This is a divisive album, a lot of people obviously love it which is great; I'm one who hears a pretty steep decline from the previous albums. A lot of it sounds like demo tracks to me. Some tracks are more developed with maybe a horn or two and Rose Stone on vocals, but it's obvious everybody was overdubbing their parts separately. There's not a band here to my ears, there's a guy in the basement with a tape machine and his friends. That guy is Sly Stone, though, so there are a lot of good moments for sure.

Expected to like this much more than I did. Too far in the avant garde, lo-fi direction for me.

One of the best funk records, an absolute masterpiece of nothing but groove.

“Oof, what’s that smell?.. It stinks so much man... please can someone open a window?.. WHERE IS THAT STANK COMING FROM???”

Finishing listening this album feels like my heart has just returned from a laborous 9-5 job. Everything adds to the funk: the vocals and the way the microphone seemingly can’t take them, the instruments and how they’re used, the way it’s produced with instruments and vocals randomly fading in and out, and the percussion just perfectly finishes it.
If this isn’t avant-garde, I don’t know what is.

Nothing better than some hard and dirty funk

Not to be contrarian, but I don't see this holding a candle to "Stand". Yes, "Family Affair" is timeless, but the rest is just okay.

Your feedback for There's A Riot Goin' On