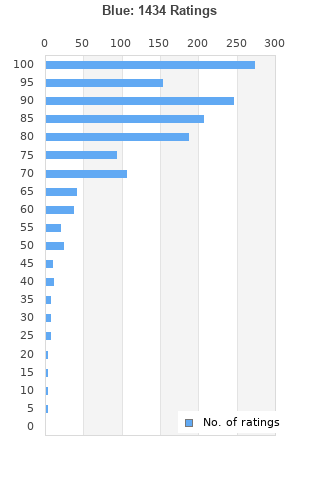 Blue is ranked as the best album by Joni Mitchell. 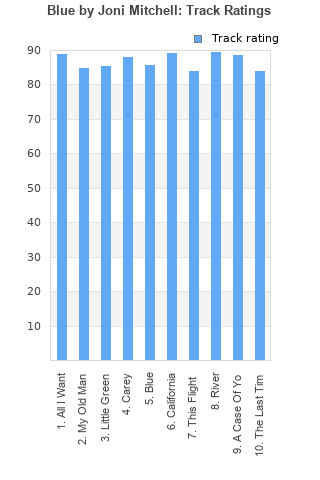 Rating metrics: Outliers can be removed when calculating a mean average to dampen the effects of ratings outside the normal distribution. This figure is provided as the trimmed mean. A high standard deviation can be legitimate, but can sometimes indicate 'gaming' is occurring. Consider a simplified example* of an item receiving ratings of 100, 50, & 0. The mean average rating would be 50. However, ratings of 55, 50 & 45 could also result in the same average. The second average might be more trusted because there is more consensus around a particular rating (a lower deviation).
(*In practice, some albums can have several thousand ratings)
This album is rated in the top 1% of all albums on BestEverAlbums.com. This album has a Bayesian average rating of 84.5/100, a mean average of 83.2/100, and a trimmed mean (excluding outliers) of 84.6/100. The standard deviation for this album is 15.9.

one of the greatest and most touching albums i've ever heard

One of the loveliest and most captivating records I know. Joni masters the outlet of songwriting as openness, she exposes so much even with of it being veiled poetics.

Nearly the entirety of Joni’s 1970’s output is excellent. But this is the peak of what she started out as. She’ll later add rockers to her track lists and jazz studs to her lineups, but Blue is Joni at her unfiltered songwriting peak and its one of my favorite albums of all time.

One of my favorite albums ever. Joni Mitchell's voice is just so pretty and soothing to listen to, and her lyrics are equally pretty.

Joni Mitchell is a great songwriter, guitarist, but her vocals on this album are difficult to some in many of the songs. Despite this, it is an honest, well-made, and personal album.
Best tracks
- River
- Blue
- This flight tonight
- Case of you

Great album with a lot of emotions.

Your feedback for Blue