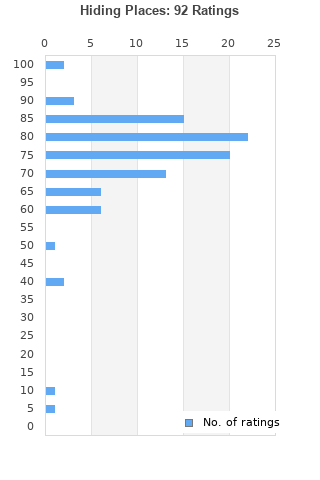 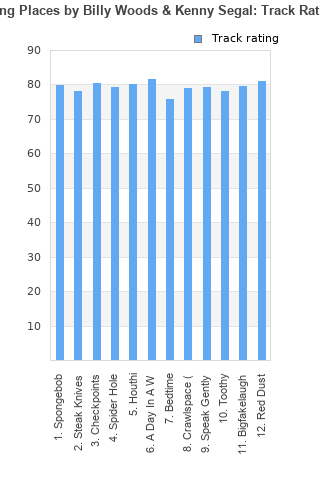 Rating metrics: Outliers can be removed when calculating a mean average to dampen the effects of ratings outside the normal distribution. This figure is provided as the trimmed mean. A high standard deviation can be legitimate, but can sometimes indicate 'gaming' is occurring. Consider a simplified example* of an item receiving ratings of 100, 50, & 0. The mean average rating would be 50. However, ratings of 55, 50 & 45 could also result in the same average. The second average might be more trusted because there is more consensus around a particular rating (a lower deviation).
(*In practice, some albums can have several thousand ratings)
This album is rated in the top 12% of all albums on BestEverAlbums.com. This album has a Bayesian average rating of 75.3/100, a mean average of 74.0/100, and a trimmed mean (excluding outliers) of 75.6/100. The standard deviation for this album is 14.4.

I don't wanna go see Nas with an orchestra at Carnegie Hall.

On 'Hiding Places', beats flow at a treacle pace at odds with everything else in hip hop in 2019. As the refrain of opening track 'Spongebob' alludes, the whole recording is being conducted under water, as over beds of murky, filtered guitars and sparse drums, Woods rhyme about struggling to maintain a foothold on life. His words conjure settings of desperation and squalor; we hear a recording of an automated message detailing a bank balance of $10, there's a tongue in cheek line about how Woods' family can no longer afford for him to be the lone bread earner. The downtempo beats allow Woods to really drag out each syllable bringing real clarity to each word, aided again by the sparse beats which at some points are so bare it's almost acapella.

As pointed out elsewhere; there does appear some sort of spiritual kinship with Earl Sweatshirt's 'Some Rap Songs' in the sense that both albums have this lonely, beat-up, deflated atmosphere where the protagonist is all defensive one-liners and anxious self-deprication.

The album's success at remaining engaging within the confines of it's abrasive, challenging production style is testament to Woods' abilities as a storyteller which, even in an environment as dark as this, point towards a light at the end of the tunnel.

Last year, Billy Woods released with Elucid, Armand Hammer's 4th album: "Paraffin". This album was a hip-hop masterpiece, which was arguably one of the best rap albums of 2018. This year Billy Woods is back with a new solo album: "Hiding Places". On this album, Woods partners with producer Kenny Segal of Los Angeles. The horrifying synths and heavy rhythms of Segal create a perfect background for Woods' angry flow. The main subject of the album is lack of money and capitalism. Billy Woods can really be considered a legend of underground rap. His discography is a collection of extraordinary albums about dehumanization, money, society ... Woods is really one of my favorite rappers of the decade and even of all time.

Your feedback for Hiding Places