Dog Whistle (studio album) by Show Me The Body 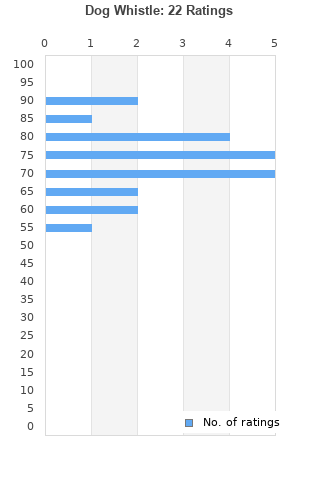 Show Me The Body bestography

Dog Whistle is ranked 2nd best out of 3 albums by Show Me The Body on BestEverAlbums.com.

The best album by Show Me The Body is Body War which is ranked number 13515 in the list of all-time albums with a total rank score of 82. 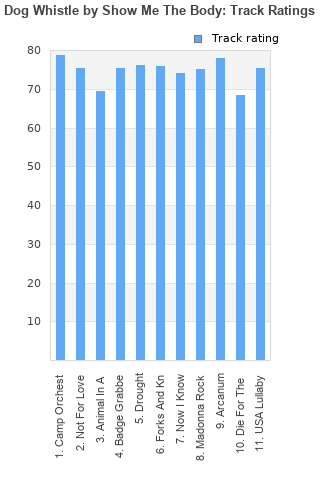 Rating metrics: Outliers can be removed when calculating a mean average to dampen the effects of ratings outside the normal distribution. This figure is provided as the trimmed mean. A high standard deviation can be legitimate, but can sometimes indicate 'gaming' is occurring. Consider a simplified example* of an item receiving ratings of 100, 50, & 0. The mean average rating would be 50. However, ratings of 55, 50 & 45 could also result in the same average. The second average might be more trusted because there is more consensus around a particular rating (a lower deviation).
(*In practice, some albums can have several thousand ratings)
This album has a Bayesian average rating of 73.1/100, a mean average of 73.2/100, and a trimmed mean (excluding outliers) of 73.2/100. The standard deviation for this album is 9.0.

Show Me The Body forged their characteristic noise-punk with their first two albums. The trio of New York had released their masterpiece with their first album "Body War" and two years later, they come back with a successor called "Dog Whistle". The first melodic and quiet minutes of "Camp Orchestra" make us dream before leaving on the fury the most total. From there, Show Me The Body left to swing their explosive noise-punk where paranoia, frustration and defeatism are felt on tracks like "Not For Love", "Badge Grabber" and "Drought". Show Me the Body is one of my favorite underground bands. This album is quite disappointing but still better than average...

Your feedback for Dog Whistle