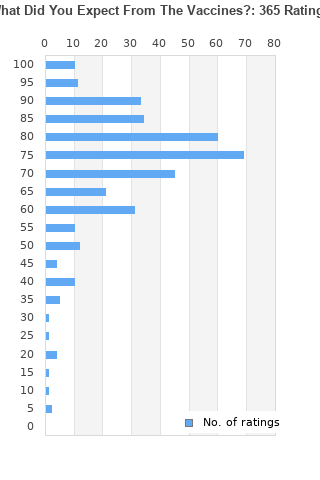 The Vaccines - What Did You Expect from the Vaccines? (2011)
Condition: Very Good
Time left: 13h 4m 5s
Ships to: Worldwide
£0.99
Go to store
Product prices and availability are accurate as of the date indicated and are subject to change. Any price and availability information displayed on the linked website at the time of purchase will apply to the purchase of this product.  See full search results on eBay 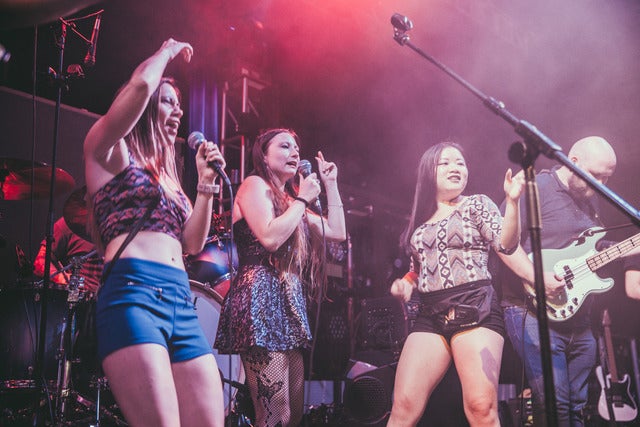 Listen to What Did You Expect From The Vaccines? on YouTube

What Did You Expect From The Vaccines? track list 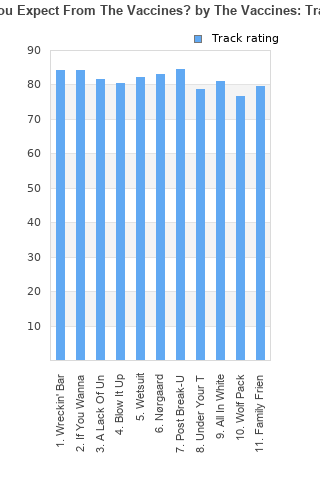 What Did You Expect From The Vaccines? rankings

What Did You Expect From The Vaccines? collection

What Did You Expect From The Vaccines? ratings

Rating metrics: Outliers can be removed when calculating a mean average to dampen the effects of ratings outside the normal distribution. This figure is provided as the trimmed mean. A high standard deviation can be legitimate, but can sometimes indicate 'gaming' is occurring. Consider a simplified example* of an item receiving ratings of 100, 50, & 0. The mean average rating would be 50. However, ratings of 55, 50 & 45 could also result in the same average. The second average might be more trusted because there is more consensus around a particular rating (a lower deviation).
(*In practice, some albums can have several thousand ratings)
This album has a Bayesian average rating of 73.6/100, a mean average of 72.2/100, and a trimmed mean (excluding outliers) of 73.6/100. The standard deviation for this album is 16.7.

What Did You Expect From The Vaccines? favourites

What Did You Expect From The Vaccines? comments

Just getting to hear this in 2019 and I love it. Agree with JimagineL that everything doesn't have to be revolutionary. This builds on and gives their twists from stuff before and delivers a great album.

This is just a super fun record! "Oh It sounds like Artic Monkeys, It isn't new, another strokes band" oh men, c'mon not everything has to be revolutionary, you guys have to put these things out of your mind.
This is why rock bands struggle to get attention, they can't move a finger without being compared to It or that. It is just annoying, and when they try to do something diferent they are criticized as well. It doesn't mean bands shouldn't be criticized or compared, but fuck, be a little more creative.

The U.K's continuing fascination with garage rock has seen the almost effortless ascendency of The Vaccines. By no means the most innovative band on the planet, The Vaccines are more concerned with adding a few more spokes than re-inventing it. And that is no bad thing considering the kind of sucker-punch songs on display here that any band worth their salt would kill to get their hands on.

A fun summer record. Although it is sometimes held back with a slight lack a variety, theres a lot to love here

I love this album, and I can see why people just consider it average junk. It's nothing groundbreaking, and most can get what it gives from so many other records. But I can't, the feeling I get from this album is almost inexplicable. The first few listens were just pleasing, but now I get so much from this, so much comes back into my mind. Wetsuit and Family Friend remind me of that summer a couple of years back when I actually started to shape as a person and started to feel so many emotions I'd never felt. Norgaard and If You Wanna remind me of the naive fun I'd have in 2011. All In White and A Lack of Understanding remind me of my first actual breakup at the age of 13. Wreckin' Bar and Under Your Thumb remind me of that girl I used to have a massive crush on that I'd go insane if she spoke to me. All these just add up, and when I listen to it, I realise that this was all just less than 3 years ago, but I still get a MASSIVE rush of bittersweet feelings. My childhood has basically gone, I'm no longer that innocent boy I used to be, cooped up in his room playing shitty PS3 games (though I'm still cooped up in my room most of the time). I no longer have the incentive to climb the treehouse in my back garden as a form of escapism, I no longer want to play on the tyre swing, and I no longer care about that trampoline I still have. I don't have the two cute rodents I had, I don't read the same books, and I don't even nearly think the same way. What I'm trying to say is this makes me realise that in the space of about 32 months, I've expanded so much, and it makes me realise, wow, time is too precious to worry about this shit, and I eventually stop worrying about it and try to become a better person.

Your feedback for What Did You Expect From The Vaccines?