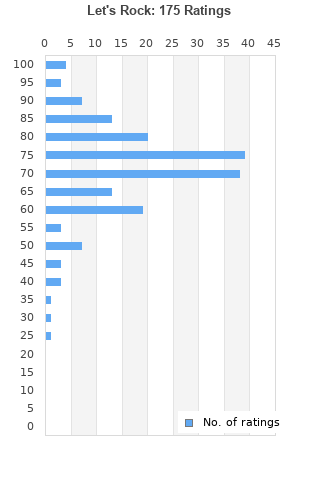 The Black Keys – Let's Rock Vinyl LP
Condition: New
Time left: 15h 40m 11s
Ships to: Worldwide
$26.99
Go to store
Product prices and availability are accurate as of the date indicated and are subject to change. Any price and availability information displayed on the linked website at the time of purchase will apply to the purchase of this product.  See full search results on eBay

Let's Rock is ranked 8th best out of 11 albums by The Black Keys on BestEverAlbums.com.

The best album by The Black Keys is Brothers which is ranked number 317 in the list of all-time albums with a total rank score of 6,225.

George Thorogood & The Destroyers
Concerts on the Green at Suneagles , Eatontown, United States. 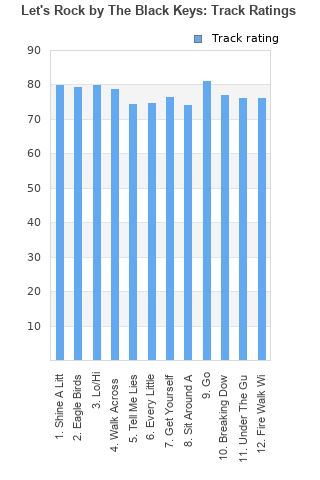 Rating metrics: Outliers can be removed when calculating a mean average to dampen the effects of ratings outside the normal distribution. This figure is provided as the trimmed mean. A high standard deviation can be legitimate, but can sometimes indicate 'gaming' is occurring. Consider a simplified example* of an item receiving ratings of 100, 50, & 0. The mean average rating would be 50. However, ratings of 55, 50 & 45 could also result in the same average. The second average might be more trusted because there is more consensus around a particular rating (a lower deviation).
(*In practice, some albums can have several thousand ratings)
This album has a Bayesian average rating of 71.8/100, a mean average of 71.1/100, and a trimmed mean (excluding outliers) of 71.7/100. The standard deviation for this album is 13.0.

I listened The Black Keys for the first time, I enjoyed this album.

There are some guitar great moments on this record. I particularly like the "Eight Miles Hile"-like guitar at the end of "Go". The songwriting is pretty good on some of the tracks but lacking on others. Solid all-around but nothing spectacular.

A good album from a band who had a good decade. If blues rock survives the 2020s, The Black Keys will be at the helm.

After a 5 year hiatus and no Danger Mouse behind the boards I eagerly looked forward to hearing what the boys would produce in 2019.
Unfortunately it’s nothing revolutionary or particularly inspiring and all feels a little stale which is hard to say about an artist with such a wonderfully deep catalogue for whom I have the greatest respect

Strong contender for most disappointing album in 2019

This is the only Black Keys album I've ever heard, and from what I can tell that's why I enjoyed it so much, everyone else is talking about how it's nothing compared to their other albums, but since I have nothing to compare it to I am unbiased and can safely say this is a very enjoyable records, very cool sounds, and catchy hooks

This is better than expected, they are clearly having fun and it shows.

The first five songs of the album + Go are the best. The rest is more filler than killer. I'd like to add that the rock sound of the record is amazing.

It's straight up blues rock. No Faults.

Your feedback for Let's Rock