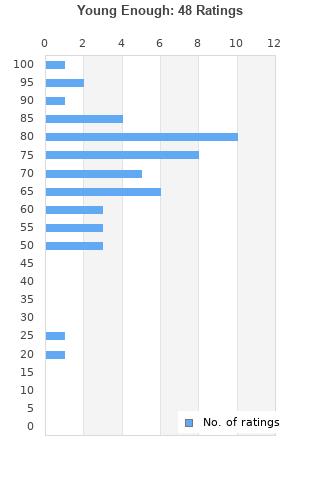 YOUNG ENOUGH Charly Bliss New Cd
Condition: Brand New
Time left: 22h 21m 40s
Ships to: Worldwide
£8.99
Go to store
Product prices and availability are accurate as of the date indicated and are subject to change. Any price and availability information displayed on the linked website at the time of purchase will apply to the purchase of this product.  See full search results on eBay

Young Enough is ranked 2nd best out of 2 albums by Charly Bliss on BestEverAlbums.com.

The best album by Charly Bliss is Guppy which is ranked number 6556 in the list of all-time albums with a total rank score of 191.

Tickets from Ticketmaster Get tickets
May
20
Thu
20:00 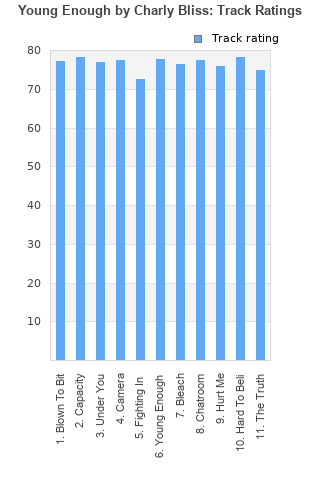 Rating metrics: Outliers can be removed when calculating a mean average to dampen the effects of ratings outside the normal distribution. This figure is provided as the trimmed mean. A high standard deviation can be legitimate, but can sometimes indicate 'gaming' is occurring. Consider a simplified example* of an item receiving ratings of 100, 50, & 0. The mean average rating would be 50. However, ratings of 55, 50 & 45 could also result in the same average. The second average might be more trusted because there is more consensus around a particular rating (a lower deviation).
(*In practice, some albums can have several thousand ratings)
This album has a Bayesian average rating of 72.2/100, a mean average of 70.9/100, and a trimmed mean (excluding outliers) of 72.0/100. The standard deviation for this album is 15.4.

I didn't love it as much as Guppy, but I still think it's a great album, and like Guppy, it's uniquely catchy all throughout. The production is more polished and synth-fueled, which isn't necessarily bad, though it does lose some grit, and the songs, while still catchy and compelling, aren't on the same level. My favorite was "Young Enough," which felt really cathartic and important in a way none of Charly Bliss' other songs ever felt, and also instantly memorable. Songs like "Capacity," "Hard to Believe," and "Bleach" are all standouts in my opinion, but they took some time to grow on me. It's not as flawless as Guppy, but still great and definitely worth a listen!!

Check out the Charly Bliss Youtube channel and they have a video for every track on the album , if your a CB fan its well worth checking out.

Also on the CB channel is a 2019 51 minute movie featuring the band in acting roles called "Ignorance Is Bliss" and is a sort of Reality TV send up ... this ones hard to recommend but its worth a look even if you don't watch the entire 51 minutes

Relentlessly upbeat indie pop. It's been done before but some of the songs are proper catchy

Your feedback for Young Enough