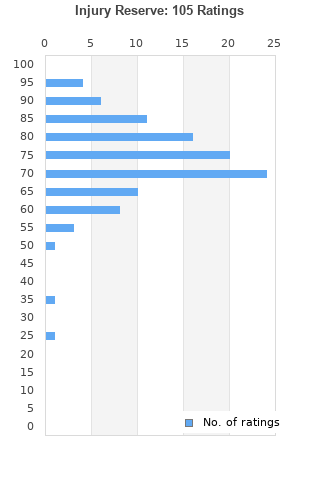 The best album by Injury Reserve is By The Time I Get To Phoenix which is ranked number 2108 in the list of all-time albums with a total rank score of 786. 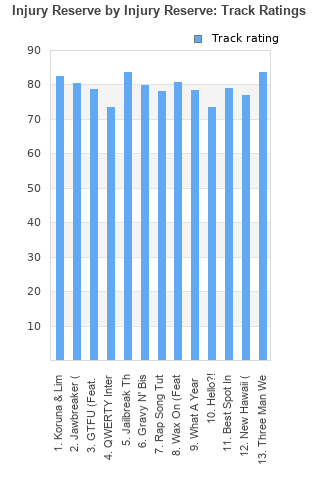 Rating metrics: Outliers can be removed when calculating a mean average to dampen the effects of ratings outside the normal distribution. This figure is provided as the trimmed mean. A high standard deviation can be legitimate, but can sometimes indicate 'gaming' is occurring. Consider a simplified example* of an item receiving ratings of 100, 50, & 0. The mean average rating would be 50. However, ratings of 55, 50 & 45 could also result in the same average. The second average might be more trusted because there is more consensus around a particular rating (a lower deviation).
(*In practice, some albums can have several thousand ratings)
This album has a Bayesian average rating of 74.0/100, a mean average of 73.3/100, and a trimmed mean (excluding outliers) of 74.2/100. The standard deviation for this album is 11.2.

Pretty cool album from Injury Reserve. Reminds me of Veteran by JPEGMAFIA.

Injury Reserve never desappoint me. In hopes of popularizing the Phoenix Rap scene, Injury Reserve, a group of two rappers, rappers Stepa J. Groggs and Ritchie With a T, and producer Parker Corey, take up the codes of hardcore hip-hop and sometimes jazz rap and combine them with the kind of experiment of JPEGMAFIA. Their brilliant mixtapes, "Floss" and "Live From the Dentist Office", have allowed them to be recognized as one of the best underground hip-hop bands. In 2019, they are back with their debut album, "Injury Reserve". It is true that the group is still learning the profession of rapper, but overall, it's a debut album that foreshadows a bright future. And then, this lack of professionalism is part of the charm of Injury Reserve. They still recorded their first mixtape at the dentist...

Your feedback for Injury Reserve