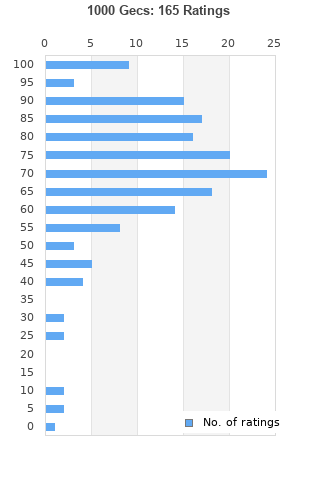 100 Gecs - 1000 Gecs And The Tree Of Clues (LP)
Condition: New
Time left: 3d 6h 28s
Ships to: Worldwide
$79.59
Go to store
Product prices and availability are accurate as of the date indicated and are subject to change. Any price and availability information displayed on the linked website at the time of purchase will apply to the purchase of this product.  See full search results on eBay 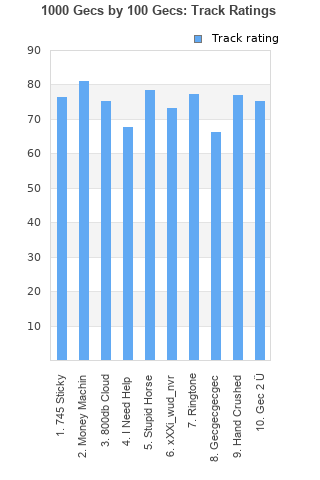 Rating metrics: Outliers can be removed when calculating a mean average to dampen the effects of ratings outside the normal distribution. This figure is provided as the trimmed mean. A high standard deviation can be legitimate, but can sometimes indicate 'gaming' is occurring. Consider a simplified example* of an item receiving ratings of 100, 50, & 0. The mean average rating would be 50. However, ratings of 55, 50 & 45 could also result in the same average. The second average might be more trusted because there is more consensus around a particular rating (a lower deviation).
(*In practice, some albums can have several thousand ratings)
This album has a Bayesian average rating of 71.5/100, a mean average of 69.1/100, and a trimmed mean (excluding outliers) of 71.4/100. The standard deviation for this album is 19.5.

I appreciate the experimentation, and insanity, of the album, but it's not for me.

TBH I used to hate 100 gecs before I even heard them because there were so many of their fans spamming the money machine intro copypasta.

Who let these guys into the music industry?

After a while this album grew a tiny bit on me It sounds unlistenable at first but you will later find a track that is bearable and that track would later not leave your head for a while. This album is decent but not great when it comes to experimental music.
6.5/10
Favorite track gecgecgecgecgec

It sucks but you'll get used to it.

This genre - because it is a genre - of sassy bitch rapping is VERY often overlooked - hence the lack of recognition of it being a genre - because it's bitches... that's sassy... that are rapping... And this lack of recognition causes people's negative assessments to not go deeper than "it's unlistenable", and out-there comparisons with '90s rave (???); people often don't really understand what they're listening if they don't have the context where it comes from.

100 Gecs chooses a more dubstep route, but it's not like we haven't seen that before (M.I.A.'s MAYA), but her rapping sound more similar to Uffie's effortless - in the literal sense - and tongue-in-cheek dissing, and her more melodic passages remind me rather of ängie or any other more modern candidate to this scene that I might have missed. But obviously they didn't just steal everything, and the combination itself is already rather original.

Instrumental tracks "I need help immediately" and the intro of "gecgecgec" are - how to put this delicately - completely asinine and devoid of anything to enjoy.

Some tracks sounds like the old rave style from the 90s.

Awesome album. High energy, abrasive and humorous but catchy at the same time. The length doesn’t bother because there is more packed into these 23 minutes than most full-length albums.

Your feedback for 1000 Gecs