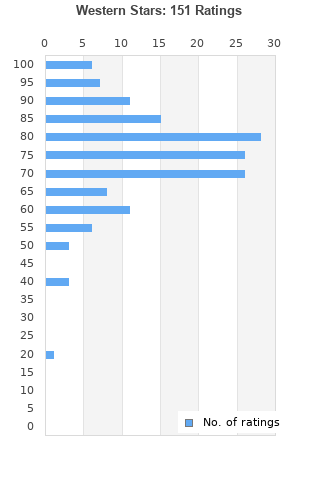 NEW Bruce Springsteen Western Stars / The Wayfarer [RSD 7" Vinyl 45] SEALED!
Condition: New
Time left: 1h 38m 56s
Ships to: Worldwide
$6.00
Go to store
Product prices and availability are accurate as of the date indicated and are subject to change. Any price and availability information displayed on the linked website at the time of purchase will apply to the purchase of this product.  See full search results on eBay

Western Stars is ranked 14th best out of 121 albums by Bruce Springsteen on BestEverAlbums.com.

The best album by Bruce Springsteen is Born To Run which is ranked number 65 in the list of all-time albums with a total rank score of 22,270. 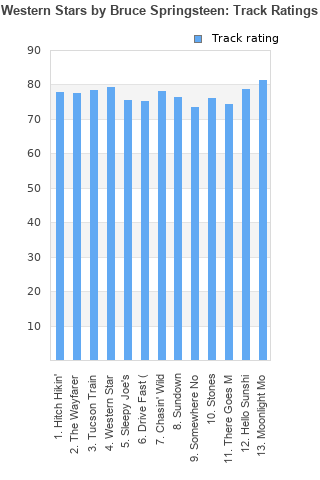 Rating metrics: Outliers can be removed when calculating a mean average to dampen the effects of ratings outside the normal distribution. This figure is provided as the trimmed mean. A high standard deviation can be legitimate, but can sometimes indicate 'gaming' is occurring. Consider a simplified example* of an item receiving ratings of 100, 50, & 0. The mean average rating would be 50. However, ratings of 55, 50 & 45 could also result in the same average. The second average might be more trusted because there is more consensus around a particular rating (a lower deviation).
(*In practice, some albums can have several thousand ratings)
This album is rated in the top 6% of all albums on BestEverAlbums.com. This album has a Bayesian average rating of 76.7/100, a mean average of 76.1/100, and a trimmed mean (excluding outliers) of 76.9/100. The standard deviation for this album is 12.0.

Jun19. I usually love Bruce's slower, solo efforts, but this one did not do it for me first time through. Not as folky as other releases. More operatic with strings and overly produced and clean. More of a Californian, Eagles vibe. A couple of songs marked for further listening. 2/5

At nearly 70 years of age and a net worth of half a billion, you’d expect The Boss to be retracing steps. However, on Western Stars his attention is clearly set on establishing a late career high. With little filler and showcasing what he does best, the artfully constructed stories are relatable to the everyman. The music is also to note, containing some of his most beautiful arrangements and intricate musicianship. Western Stars only solidifies Springsteen’s mastery of songwriting and is a gift to his millions of fans including myself.

Enjoyed. Different direction for sure, however the Boss pulled it off well.

Western Stars has grown on me. Some beautiful lyrics. Tracks that stand out for me are Tuscon Train, There goes my Miracle & Hello Sunshine.

I applaud the production, as it makes decent lyrical content sound better. Not as good as Wrecking Ball but I'll gladly settle for records like this from an American treasure who is entering the sixth decade of his career.

this is best album since ghost of tom joad.beautiful on the ear.sold well her in uk but im surprised not as well liked in usa.it took only a couple of plays until I felt the love for it.not many albums i can say that instant love for it.

Decent album which I suspect will grow on me the more listens I have.

Wow. I didn't really expect this to be this good when I started to listen. But I was convinced after the first three songs. It's americana, it's bombastic but somehow most of the songs remain intimate.

Your feedback for Western Stars