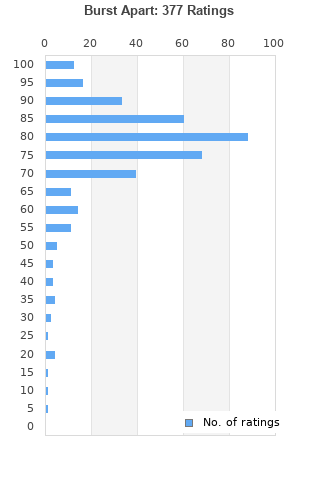 Burst Apart is ranked 2nd best out of 10 albums by The Antlers on BestEverAlbums.com.

The best album by The Antlers is Hospice which is ranked number 261 in the list of all-time albums with a total rank score of 7,227. 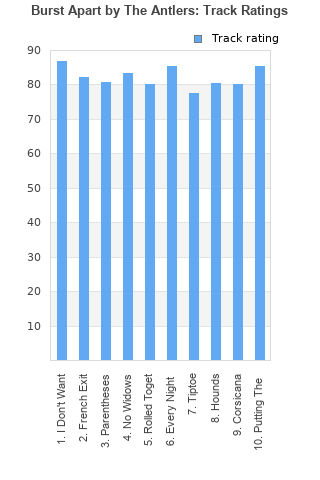 Every Night My Teeth Are Falling Out
Rating: 85 (79 votes)Comments:

Rating metrics: Outliers can be removed when calculating a mean average to dampen the effects of ratings outside the normal distribution. This figure is provided as the trimmed mean. A high standard deviation can be legitimate, but can sometimes indicate 'gaming' is occurring. Consider a simplified example* of an item receiving ratings of 100, 50, & 0. The mean average rating would be 50. However, ratings of 55, 50 & 45 could also result in the same average. The second average might be more trusted because there is more consensus around a particular rating (a lower deviation).
(*In practice, some albums can have several thousand ratings)
This album is rated in the top 3% of all albums on BestEverAlbums.com. This album has a Bayesian average rating of 77.6/100, a mean average of 76.2/100, and a trimmed mean (excluding outliers) of 77.8/100. The standard deviation for this album is 15.0.

Having heard this a couple of times, I like this as much as Hospice.
Great musicality, and less emotion in the vocals.

Enjoyable! Perfect mix of expiremental and down to earth. I can sense some radiohead-ish influence on this one. Especially on track number 3, 'Parentheses'. The vocals accompany the track very well. Tasteful use of synth and vibe bass. Lyricism is exceptional. Definetly going to return to this one.

Not as happy as their last record. I guess they don't like it when people dance at a Hospice. I can dig it.

"but it's the best album of the 10's so far." this is why I don't post on these comment pages anymore, can't edit them later on when you disagree with yourself. Still an album I really enjoy though, although it isn't a scratch on Kaputt as far as the 10s goes, in my current opinion subject to change.

The album cover for both this album and Hospice are absolutely perfect!!! The two arms on Hospice give a beautiful illustration of both the album's story and the emotions audiences feel when they listen to it. Burt Apart is very similar when it comes to the message delivered by the album cover. Less straightforward as the two arms that perfectly capture Hospice's themes, moods, and tone; the wet imagery of greens, yellows, and black set up a perfect entrance to the music of Burst Apart.

I really like this album. I think this album is very intimate but without all the pain you can feel listening to Hospice. The Antlers, once again, made something contemplative, emotional, beautiful and also relaxing. This album is in my heart

If you want to talk about high quality dream pop, look no further than The Antlers and more specifically this album. It’s ethereal, it’s interesting, it’s a great album to listen to. It’s dream pop with a hint of indie rock to it. And it’s great music. If you like to sit down, relax, turn off the lights, close your eyes and tune out to some music, this is the album for you. It may put you to sleep, but in the best, most relaxing way possible. It’s a great album and definitely one worth listening to.

Your feedback for Burst Apart