Hospice (studio album) by The Antlers 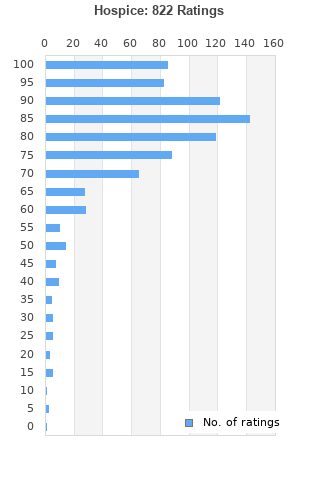 THE ANTLERS-HOSPICE-RARE CD ALBUM
Condition: Very Good
Time left: 3d 1h 12m 28s
Ships to: Worldwide
£1.99
Go to store
Product prices and availability are accurate as of the date indicated and are subject to change. Any price and availability information displayed on the linked website at the time of purchase will apply to the purchase of this product.  See full search results on eBay

Hospice is ranked as the best album by The Antlers. 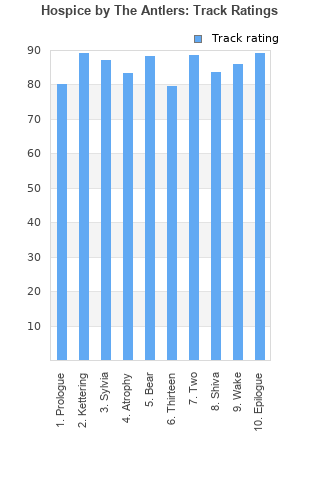 Rating metrics: Outliers can be removed when calculating a mean average to dampen the effects of ratings outside the normal distribution. This figure is provided as the trimmed mean. A high standard deviation can be legitimate, but can sometimes indicate 'gaming' is occurring. Consider a simplified example* of an item receiving ratings of 100, 50, & 0. The mean average rating would be 50. However, ratings of 55, 50 & 45 could also result in the same average. The second average might be more trusted because there is more consensus around a particular rating (a lower deviation).
(*In practice, some albums can have several thousand ratings)
This album is rated in the top 1% of all albums on BestEverAlbums.com. This album has a Bayesian average rating of 82.2/100, a mean average of 80.5/100, and a trimmed mean (excluding outliers) of 82.3/100. The standard deviation for this album is 16.6.

Extremely beautiful but the lyrical content is too heartbreaking for me to listen to. One of the few albums that genuinely hurts me. In some ways this is one of my favorite albums, but as is, I have too hard of a time listening to it. I'll give it a 100 because from an artistic standpoint, this is why music exists.

A concept album about the relationship between a hospice worker and a terminal patient is very creative. It's not a very easy listen. Music plays between soft and loud with moments where it seems like not much is going on. Unfortunately, I didn't manage to connect with it, all this sadness passed me by.

One of the fondest memories of my life is sitting on my bedroom floor at 1 am in absolute darkness with the best headphones I could find listening to this for the first time.

Beautiful conceptual record, best listened to when you can devote your whole attention to it. Heartbreaking stuff.

I haven't such strong emotions from listening to an album in some time... tearjerker of an album, and the driving instrumentation is superb. Still doesn't beat MPP for album of the year in my humble opinion, but boy is it close

Absolutely brilliant album, perhaps the third greatest album of the 00s along with Kid A and In Rainbows. This is also a great entry point to explore the rest of the Antlers discography.

One of the best concept albums of the last 20 years. Emotional, beautiful and heartbreaking.

Your feedback for Hospice