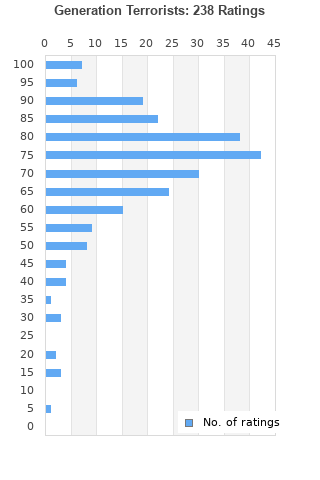 Generation Terrorists is ranked 4th best out of 17 albums by Manic Street Preachers on BestEverAlbums.com.

The best album by Manic Street Preachers is The Holy Bible which is ranked number 457 in the list of all-time albums with a total rank score of 4,160. 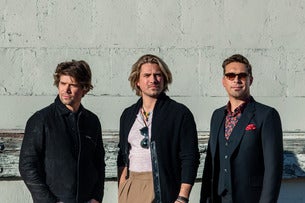 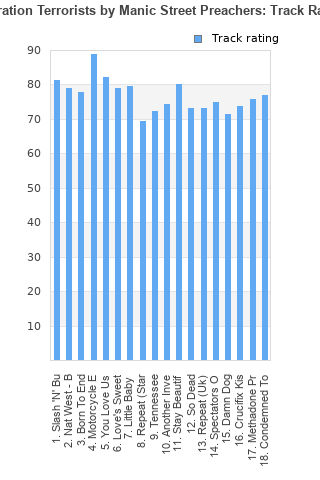 Rating metrics: Outliers can be removed when calculating a mean average to dampen the effects of ratings outside the normal distribution. This figure is provided as the trimmed mean. A high standard deviation can be legitimate, but can sometimes indicate 'gaming' is occurring. Consider a simplified example* of an item receiving ratings of 100, 50, & 0. The mean average rating would be 50. However, ratings of 55, 50 & 45 could also result in the same average. The second average might be more trusted because there is more consensus around a particular rating (a lower deviation).
(*In practice, some albums can have several thousand ratings)
This album has a Bayesian average rating of 73.2/100, a mean average of 71.6/100, and a trimmed mean (excluding outliers) of 73.2/100. The standard deviation for this album is 16.4.

Avoid the bonus tracks edition as it contains one of the worst covers of all time in Wrote for Luck. Imagine early MSP covering Happy Mondays. Yep, it sounds exactly like you'd expect, a very bad idea, truly awful.

Taking musical cues from the Clash, PE, GnR, McCarthy, New York Dolls amongst others, and lyrical inspiration from the world of politics, carving 4 real and telling people it would be the best rock album ever. Massive ambition and drive, with plenty of hype but over shooting the runway somewhat. As has been said, musically it's closest to the Motley Crue debut than GnR or the Clash and it's at least 20m too long. Cull the poorer tracks and it's a good record. It's still decent but I'd rather hear the Crue debut. It wouldn't be until album 3 that they matched their starry ambition musically and lyrically, to show that really they could make one of the great rock album statements after all, they just weren't ready in '92.

30th best album of 1992? Way too low. Half this album is great, the rest good. This album should be in my top 100 and will be if I can be bothered to update my chart.

Great début, but it is a bit too long. As a whole, I preferred Gold Against The Soul and The Holy Bible.

Feckin' solid debut from one of the best British bands....ever.

Motorcycle Emptiness is one of few songs that I could call 'perfection'(though I often enjoy the unperfectness.)

Ballsy album. As said, first half stronger than the second.

Your feedback for Generation Terrorists