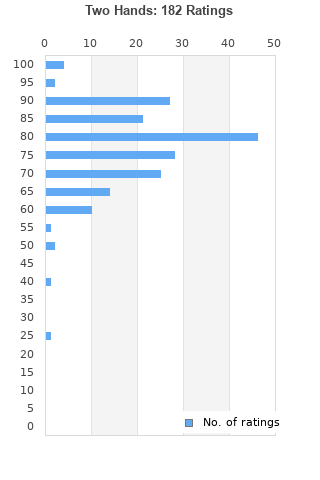 Big Thief Two Hands Sky Blue Vinyl Newbury Comics 600 Copies SEALED
Condition: New
Time left: 1d 3h 1m 40s
Ships to: Worldwide
$58.99
Go to store
Product prices and availability are accurate as of the date indicated and are subject to change. Any price and availability information displayed on the linked website at the time of purchase will apply to the purchase of this product.  See full search results on eBay

Two Hands is ranked 3rd best out of 5 albums by Big Thief on BestEverAlbums.com. 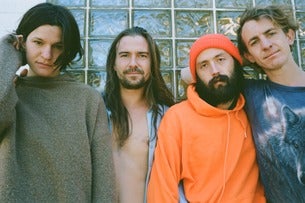 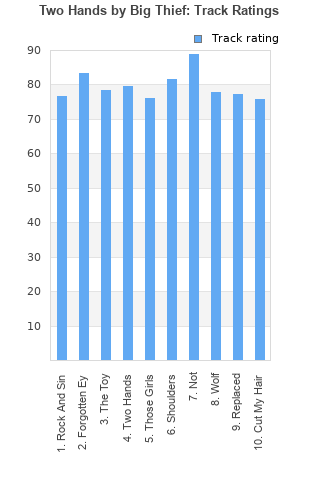 Rating metrics: Outliers can be removed when calculating a mean average to dampen the effects of ratings outside the normal distribution. This figure is provided as the trimmed mean. A high standard deviation can be legitimate, but can sometimes indicate 'gaming' is occurring. Consider a simplified example* of an item receiving ratings of 100, 50, & 0. The mean average rating would be 50. However, ratings of 55, 50 & 45 could also result in the same average. The second average might be more trusted because there is more consensus around a particular rating (a lower deviation).
(*In practice, some albums can have several thousand ratings)
This album is rated in the top 5% of all albums on BestEverAlbums.com. This album has a Bayesian average rating of 77.0/100, a mean average of 76.9/100, and a trimmed mean (excluding outliers) of 77.3/100. The standard deviation for this album is 10.3.

Recorded pretty much live and with minimal takes in a studio out in the desert near the Mexico border , the album was actually recorded way back in June 2018 . The album feels live and boy does it sound great , tracks such as “Shoulders “ , “ Not” and “Forgotten “ simply smoking through the headphones

2019’s ‘U.F.O.F’ was good but far from great as it sounded more like an Adrianne Lenker solo album, but this album is Big Thief as a collective unit doing what they do best

Love this band, adore this album

I like this a lot. Wasn't too into UFOF so went into this with low expectations. Needless to say, Two Hands blew me away. Not a single bad song on here. I'll have to give UFOF another listen see if it grows on me more after this excellent record.

Hey BEA, are you really still sleeping on this one?! This is really good stuff for me. Took a couple of listens but then it really got under my skin. There is a lovely raw intimacy here and the tunes seem to get stronger with each listen. Not heard U.F.O.F yet but I'll be very pleasantly surprised if it's as good as this.

U.F.O.F was alright. This is excellent.

"Not" is in the running for song of the year.

Here's the pitch for this album: "What if we didn't sound like we just got out of bed?" At any rate, this is another terrific collection of songs. Big Thief is really stealing my heart this year.

Your feedback for Two Hands