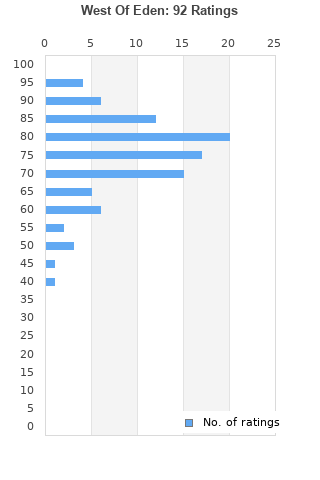 West Of Eden is ranked as the best album by HMLTD. 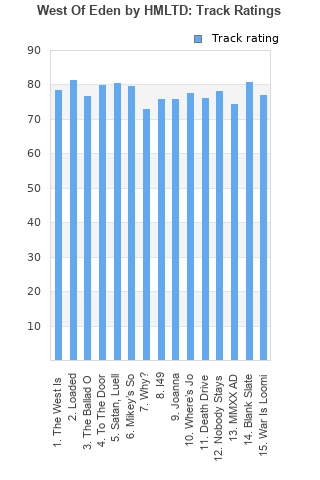 Rating metrics: Outliers can be removed when calculating a mean average to dampen the effects of ratings outside the normal distribution. This figure is provided as the trimmed mean. A high standard deviation can be legitimate, but can sometimes indicate 'gaming' is occurring. Consider a simplified example* of an item receiving ratings of 100, 50, & 0. The mean average rating would be 50. However, ratings of 55, 50 & 45 could also result in the same average. The second average might be more trusted because there is more consensus around a particular rating (a lower deviation).
(*In practice, some albums can have several thousand ratings)
This album is rated in the top 9% of all albums on BestEverAlbums.com. This album has a Bayesian average rating of 75.8/100, a mean average of 75.7/100, and a trimmed mean (excluding outliers) of 76.1/100. The standard deviation for this album is 10.4.

Interesting and mostly compelling but comes off as a little messy to me. I like that they are influenced by such a wide range of music and can put it together into something meaningful but sometimes the styles don't really mix and sound goofy, especially when they try to incorporate hip hop. That being said, it's an ambitious project that is definitely worth at least something. It's close to being something special, I think, and I'm looking forward to their future releases. The lead singer sounds like King George from Hamilton to me which is a compliment in my book, that dude is awesome. I enjoy the theatrics.

It's pretty incredible and addictive and also quite intoxicating. So many of these songs get stuck in my head it's crazy. They blend a various selection of genres together in a very exciting and super duper cool sorta way. I dunno I just love it.

An eclectic listen. You could easily say it lurches around the genres but it's actually a pretty coherent record. I liked it.

Amazing album, there are bangers there are tears, there is hell of a lot of glam there are shivers and there is a ton of originality as well as some really fresh tributes to 80s music. The band mixes contemporary indie with some reaally good punk and a touch of pop and trap. (yeah that's a lot but it works really well) West Of Eden is a thing of beauty and is not a 100 only because of a lack of a good closing track.

Your feedback for West Of Eden