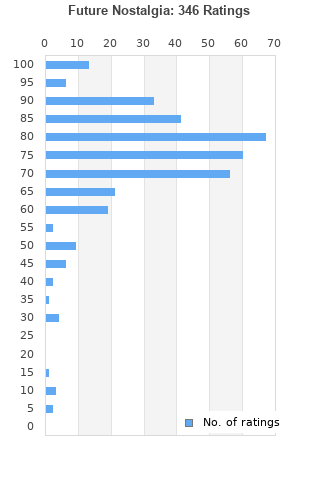 Dua Lipa - Future Nostalgia (CD 2020)
Condition: Brand New
Time left: 6h 18m 13s
Ships to: Worldwide
£16.90
Go to store
Product prices and availability are accurate as of the date indicated and are subject to change. Any price and availability information displayed on the linked website at the time of purchase will apply to the purchase of this product.  See full search results on eBay

Future Nostalgia is ranked 2nd best out of 2 albums by Dua Lipa on BestEverAlbums.com.

The best album by Dua Lipa is Dua Lipa which is ranked number 8214 in the list of all-time albums with a total rank score of 140. 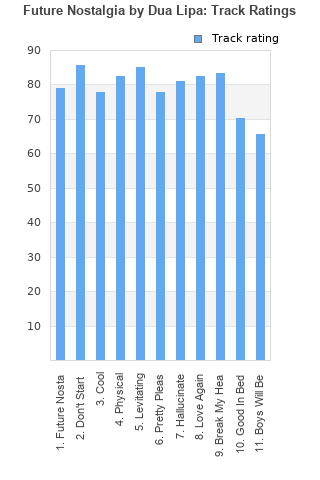 Rating metrics: Outliers can be removed when calculating a mean average to dampen the effects of ratings outside the normal distribution. This figure is provided as the trimmed mean. A high standard deviation can be legitimate, but can sometimes indicate 'gaming' is occurring. Consider a simplified example* of an item receiving ratings of 100, 50, & 0. The mean average rating would be 50. However, ratings of 55, 50 & 45 could also result in the same average. The second average might be more trusted because there is more consensus around a particular rating (a lower deviation).
(*In practice, some albums can have several thousand ratings)
This album is rated in the top 6% of all albums on BestEverAlbums.com. This album has a mean average rating of 77.0/100. The trimmed mean (excluding outliers) is 77.0/100. The standard deviation for this album is 12.5.

I feel like I'm missing something with this album. This plays like any Katy Perry/Demi Lovato album for me.

Solid album! Every song has that "something" to make it very enjoyable. I think "Physical" is the best song from the album and one of the best pop tracks in years.

Very solid pop album. Definitely surprised at how much I enjoyed this. Excellent production, and very catchy melodies and beats. The lyric falls a little flat, and the final anthem feels shallow, as agreeable as the statements are. But definitely a great album of jams.

One of the biggest surprises of the year. A very solid album by one of the mainstream pop artists that I didn't like at all before. Most of the lyrics are still trite and the songs are mixed too loudly (loudness war is never going to end it seems), but none of that matters when a pop record is catchy and enjoyable. And this one certainly is. Love Again is the feelgood song of the year.

Good Pop Album. Seems to be the next big thing. I can understand the hype. There are good ideas, catchy melodies, great production.
Highlights: Hallucinate, Love Again, Physical, Cool

This will be the definitive pop album of the Coronavirus pandemic- Just watch. This is slick enough to engage Dua’s core audience plus broad in scope enough to rope in new listeners. I’ve been listening to it on repeat while stuck in quarantine lol.... It’s real deal pop perfection. Try “Levitating”.....legit.

Nothing very memorable about this. Not really my thing.

Yes that is the same sample White Town used, and being able to recognize it immediately makes me feel really fucking old.

Anyways I actually really dig this! maybe doesn't quite have enough of the "Future" that's promised early on at least sonically (except on "Don't Start Now", which feels like a laser'd-up version of one her earlier hits), but with nostalgia that for once sounds this, yes, fresh and purposeful it's hard to complain. Maybe because it takes more of it's ideas from late 70s disco-1980 disco and that turn of the millenium-to-early '00s stage when the dance hits had a more noticeable house influence, it doesn't just melt into another tired 80s pastiche that felt promised (except on the the aptly-titled "Physical", which is engaging enough to forgive anyways).

In many ways I'm reminded of last year's Dedicated, another album with a similar sultry-yet-sinewy sound that had a lot of similar influences and that musically was very attractive... but always felt like it was missing something, or that it just wasn't a good album for Carly Rae personally, as much as I love her dearly. Now it seems clear that it needed that kind of larger-than-life swagger that's also slyly circumvent about when to push the music deeper into the surface that Dua provides here. It's one snappy velvet-rope of a release, with only one truly forgettable moment ("Hallucinate"), that works pretty seamlessly as a singular sound but also (I can't stress this enough) how it finally reminds the pop world about the beauty of brevity. This is not some turgid 18 track dumping ground, trying to tick as many streams and find it's way onto the highest number of playlists as possible, at 37 minutes it almost never loses it's steam or feels un-neccessarily flabby, where nearly every moment she knows exactly what she's doing and how best to maximize the potential of each track without over-doing it....

... well, usually. Unavoidably it feels like we just can't have a constiently immaculate pop release that can simply announce it's importance based on the music alone, now everything has to have it's obligatory Very Important Message moment. The problem here (the offending number "Boys Will Be Boys") is that it feels like it both wants to be a button-pushing conversation starter but also end up feeling as blandly inspirational as a latter-day Pink or Alessa what'shername track, which means you get big orchestral arrangements (yes, and a fucking choir too) with simplified sloganeering lyrics- delivered in Dua Lipa's coolly detached prescence that hitherto has worked so well but at this moment guarantees any attempt at a provocation useless. Even if it was secretly intended as the most basic cheeky kiss-off. When the album should've been enjoying an ecstatic victory lap or a more organic swell to a thundering closer, this becomes a limp attempt at political relevance that brings nothing new to the table and hammers the ending flat in the process (in many ways the album could've ended with the more early 00s hip-hop influenced "Good in Bed", not dissimilar in themes but less blandly preachy and a far more congenial way to go out).

While that might be a bit of a dissapointing post-script (nobody goes to the club awaiting a scrapped-together lecture at 1:57 am), it doesn't destroy the appeal of what came before it. I think it's best to temper expectations somewhat as the over-praise has been a bit unavoidable (in these apocalyptic times anything this sleek and sexy and well-produced and get-the-bootstraps-kicking is bound to get that treatment), and whether this does end up delivering on the initial promise of being the start of something big or just a great little pop capsule in it's own right I can't imagine it will ever stop sounding this exquisite in the... *tongue out* Future.

Your feedback for Future Nostalgia