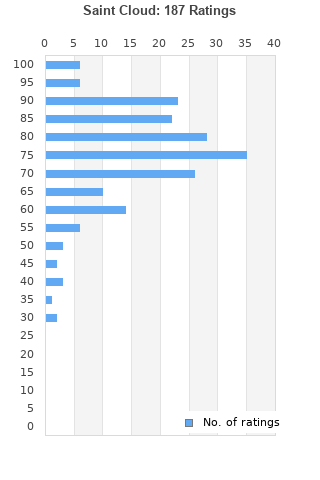 WAXAHATCHEE-SAINT CLOUD (DIG) (UK IMPORT) CD NEW
Condition: Brand New
Time left: 3d 6h 58m 7s
Ships to: Worldwide
$21.67
Go to store
Product prices and availability are accurate as of the date indicated and are subject to change. Any price and availability information displayed on the linked website at the time of purchase will apply to the purchase of this product.  See full search results on eBay

Saint Cloud is ranked as the best album by Waxahatchee. 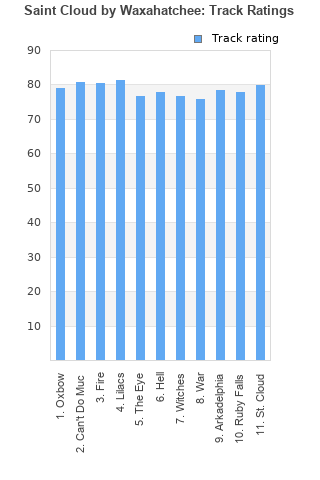 Rating metrics: Outliers can be removed when calculating a mean average to dampen the effects of ratings outside the normal distribution. This figure is provided as the trimmed mean. A high standard deviation can be legitimate, but can sometimes indicate 'gaming' is occurring. Consider a simplified example* of an item receiving ratings of 100, 50, & 0. The mean average rating would be 50. However, ratings of 55, 50 & 45 could also result in the same average. The second average might be more trusted because there is more consensus around a particular rating (a lower deviation).
(*In practice, some albums can have several thousand ratings)
This album is rated in the top 17% of all albums on BestEverAlbums.com. This album has a Bayesian average rating of 75.0/100, a mean average of 75.1/100, and a trimmed mean (excluding outliers) of 75.1/100. The standard deviation for this album is 12.7.

Really fun but also able to be emotional. I enjoy the unique vocals and the simple but effective acoustic rhythm. I prefer the more upbeat tracks but the slower ones show off a softer side that is also worthy of praise.

A fabulous album .Not a dud track on it and immensely playable.

I really appreciate what Waxahatchee is doing with the album conceptually. The way she is addressing addiction through her southern roots with the Americana music is right on point, but for some reason the album isn't clicking with me. The music doesn't strike me in any unique way, and the lyrics sometimes become so poetic that its hard to grasp meaning. Hoping this will grow on me more.

Dylan-esque. Not entirely memorable but not terrible by any means

Masterfully written and engaging. I'm not even a huge fan of things on the fringe of folk/country, but I love almost every song on this album. This is probably my favorite release from Waxahatchee, and Fire might be my song of the year so far.

Yet again, Waxahatchee nails it. I'm super impressed with Saint Cloud. This is her most cleanly produced, and most emotionally satisfying album yet. How is it that an artist like her gets better and better with so many releases under their belt? If she keeps this up, the next one's bound to be a masterpiece.

Your feedback for Saint Cloud