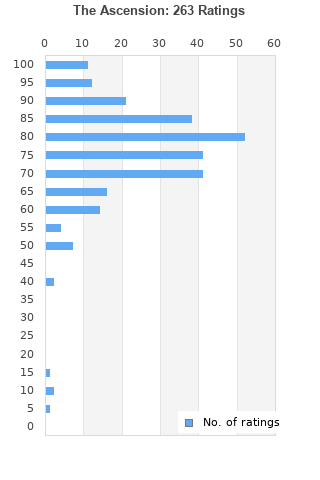 The Ascension is ranked 6th best out of 23 albums by Sufjan Stevens on BestEverAlbums.com.

The best album by Sufjan Stevens is Illinois which is ranked number 45 in the list of all-time albums with a total rank score of 25,285. 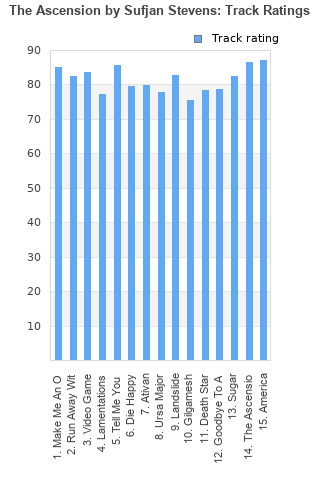 Rating metrics: Outliers can be removed when calculating a mean average to dampen the effects of ratings outside the normal distribution. This figure is provided as the trimmed mean. A high standard deviation can be legitimate, but can sometimes indicate 'gaming' is occurring. Consider a simplified example* of an item receiving ratings of 100, 50, & 0. The mean average rating would be 50. However, ratings of 55, 50 & 45 could also result in the same average. The second average might be more trusted because there is more consensus around a particular rating (a lower deviation).
(*In practice, some albums can have several thousand ratings)
This album is rated in the top 4% of all albums on BestEverAlbums.com. This album has a Bayesian average rating of 77.5/100, a mean average of 76.5/100, and a trimmed mean (excluding outliers) of 77.6/100. The standard deviation for this album is 14.5.

I've been listening to this album again ever since those first months after release, and I must say I no longer connect with it that much that I consider it to be a 10/10 (I think my emotional state around that time contributed to my attachment to the themes and sounds on this), but I still think it's a very good record.

Interesting project but lacks consistency in my opinion, its a good album with good production but Sufjan can do it better as we know

Some mixing issues here and there. Best example of that is in the song "Death Star" - those high-pitched bells kind of hurt in the ears XD

Not for me. The lyrics are ok but I don't find anything else very appealing. There are a few moments that I find compelling but for the most part I didn't enjoy this.

This is a very good album! Sufjan is a very talented lyricist and musician no matter what genre he does. I do feel like this album is a bit too long for me or else my rating would be higher.

I feel torn. On the one hand beautiful songs, on the other hand experimental sound constructs. Highlight: Sugar

Good album by Sufjan, there is much material for me to digest but some incredibly catchy and memorable moments particularly at the end of the record.

One word. Talent. Another cracking record from Sufjan. Love the electronic layering. Some of it is almost too hypnotic.

I have been in awe of this album this past week. I don't think its on the level of Illinois but I also think its unreasonable to always compare an artist's output with their opus. As a piece of music in the grand design of Sufjan's world though, this album has delivered spectacularly. The way you can draw a thematic line between Carrie and Lowell and this album through everything he released between them is, I believe, the most underappreciated thing about Sufjan's discography. Its just sooo delicate, almost surgically precise.. and it has landed so beautifully, so theatrically on this excellent album. Its masterful. A fulfilled vision of an artist in complete control of his art.

There is no one making music right now, who is in the same league as Sufjan. I don't mean that he's that good that no one can touch him (though he makes a solid case for it), but the way he has a handle on his career and his sound and the unhinged, unrestricted creative vision he displays. Its a treat to be witnessing his music career in real time.

Your feedback for The Ascension