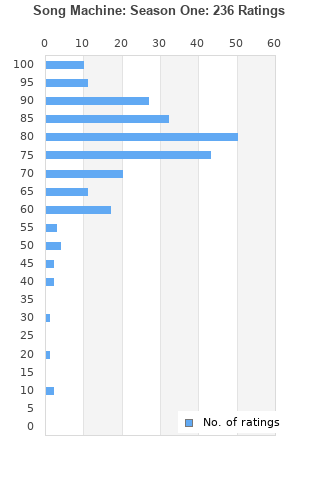 Song Machine: Season One is ranked 4th best out of 12 albums by Gorillaz on BestEverAlbums.com.

The best album by Gorillaz is Demon Days which is ranked number 132 in the list of all-time albums with a total rank score of 12,273. 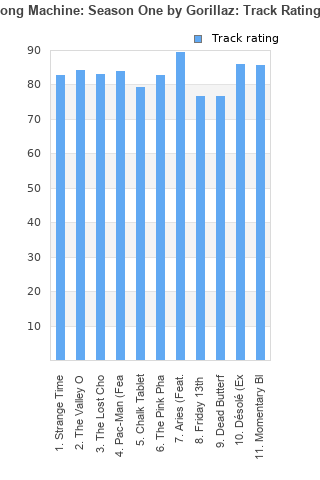 Rating metrics: Outliers can be removed when calculating a mean average to dampen the effects of ratings outside the normal distribution. This figure is provided as the trimmed mean. A high standard deviation can be legitimate, but can sometimes indicate 'gaming' is occurring. Consider a simplified example* of an item receiving ratings of 100, 50, & 0. The mean average rating would be 50. However, ratings of 55, 50 & 45 could also result in the same average. The second average might be more trusted because there is more consensus around a particular rating (a lower deviation).
(*In practice, some albums can have several thousand ratings)
This album is rated in the top 3% of all albums on BestEverAlbums.com. This album has a Bayesian average rating of 78.0/100, a mean average of 77.5/100, and a trimmed mean (excluding outliers) of 78.3/100. The standard deviation for this album is 13.8.

There is a lot of reasons to love this record such as the diverse feature list and also crisp sound that is due to the production. However, on the whole I think it is a bit confused and feels a bit lost. There are a lot of songs that just don't hit and feel like they lack substance. Also, I don't think the feature performances are really very good at all, bare a couple which are amazing, and they let down the album on the whole. Furthermore, it just isn't as cohesive as their other records, such as Plastic Beach, which is disappointing to say as I love Gorillaz. Despite this, there are great moments and still a lot to enjoy about the record. This includes the variety on the album with every song being unique and so it is very tough to be bored. Overall, I was let down by this record but it does have it's redeeming moments.

Super weird but super cool! Only the Gorillaz could swing this kind of project.

Really, really pleased with these songs. Surprised it didn't get more recognition on the year-end lists. A long-listen with some less-than-stellar tracks, but it does genuinely feel like a 'song machine' on shuffle. Everything sounds really crisp, even the ones I don't like as much.

Not my favorite but not bad. An interesting concept but ultimately I just don't think many of the songs are that good. I'm not impressed with a decent amount of the features. The deluxe version is more of the same.

This is the Gorillaz album I’d been waiting fifteen years for. Demon Days felt like the ultimate pleaser and the best, most distilled record Gorillaz could have released. I loved Plastic Beach and has some real moments of genius, but just seems a little high concept and disjointed in places.

Humanz and The Now Now had decent moments but were not great albums.

With Song Machine, Damon has truly perfect the craft of what Gorillaz should be in 2020. Playful, daring and the bi-monthly “single” format allows them to fully immerse on a single track - carefully curated guest stars, artwork and a video to tie it together.

The only real criticism I have is the artwork and title... if it read less like a compilation and had a great Jamie Hewlett cover then I strongly feel it would’ve charted higher in end of year lists.

Song Machine in a lot of ways feels like Gorillaz self titled. It is a collection of wonderful tracks without a narrative cohesion. The features are managed very well, with each guest adding an effective flavor to their track. In particular, I have to compliment Leee John's breathtaking voice on "The Lost Chord". I do not think all the tracks work with "Friday 13th", "Dead Butterflies", and "Chalk Tablet Towers" feeling subpar.

This feels like more of a cohesive Gorillaz album rather than a playlist of random artists. Sits third in my reckoning behind the first 2 albums that were truly pure Gorillaz albums.

Good introduction to gorillaz, I'll listen to more of their projects in the future.

Your feedback for Song Machine: Season One