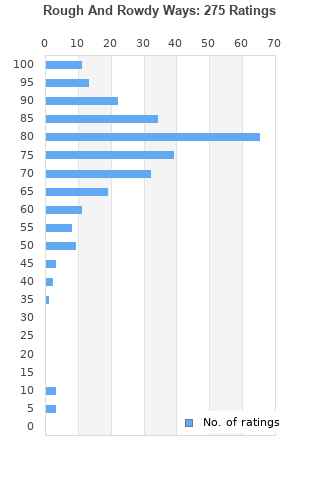 Rough And Rowdy Ways is ranked 18th best out of 74 albums by Bob Dylan on BestEverAlbums.com.

The best album by Bob Dylan is Highway 61 Revisited which is ranked number 26 in the list of all-time albums with a total rank score of 35,916. 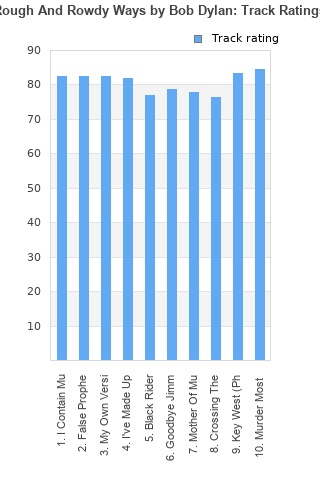 Rating metrics: Outliers can be removed when calculating a mean average to dampen the effects of ratings outside the normal distribution. This figure is provided as the trimmed mean. A high standard deviation can be legitimate, but can sometimes indicate 'gaming' is occurring. Consider a simplified example* of an item receiving ratings of 100, 50, & 0. The mean average rating would be 50. However, ratings of 55, 50 & 45 could also result in the same average. The second average might be more trusted because there is more consensus around a particular rating (a lower deviation).
(*In practice, some albums can have several thousand ratings)
This album is rated in the top 6% of all albums on BestEverAlbums.com. This album has a Bayesian average rating of 76.4/100, a mean average of 75.4/100, and a trimmed mean (excluding outliers) of 76.5/100. The standard deviation for this album is 14.9.

It is shocking to me that Dylan can still make an album this good. Lyrically stunning. He's gonna make us lonesome when he goes...

This is a much better album than I expected based on a recent performance I saw of him. His voice is surprisingly good and has more control than I thought he was capable of. His band is pretty solid though nothing really challenging is asked of them. There are a few blues jams but it's a sedated album for the most part. Which makes sense because Bob is an old ass man but doesn't make for the most fun album. He can't really sing so the only real risks that are taken are in the songwriting which makes for a lackluster album I think.

Solid enough album but it's not the classic that it's being made out to be. Good enough to be in my top 50 albums of the year. I'm hoping that it grows on my more than it has so far.

A very good album, my favorite tracks are "Black Rider" and "Murder Must Foul".

It contains some good moments, great late career effort but it was definitively too long monotone contrary to the title "rough and rowdy ways". I know Dylan's voice isn't usually his greatest tool but it sounds awful on a couple of these songs. Best tracks: I contain multitude, black rider and Key West. Worst/longest track: murder most foul.

Pretty good album, worse than Time Out of Mind up to Modern Times but a very relaxing and chill album to listen to.

Sure, it often feels like Bob Dylan in his heyday, but then you just want to go listen to those older records. Still solid. Even middle-of-the-road or lesser Dylan is still quite good.

Each individual track is so good that, aside from Crossing the Rubicon, you could fool someone into thinking this is a greatest hits compilation. Best Dylan album since Desire.

Your feedback for Rough And Rowdy Ways