Codes And Keys (studio album) by Death Cab For Cutie 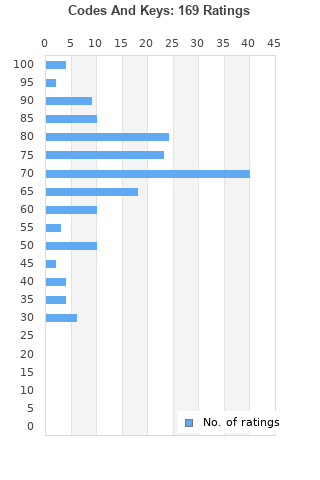 Codes And Keys by Death Cab for Cutie (CD, May-2011, Atlantic)
Condition: Like New
Time left: 22h 29m 28s
Ships to: Worldwide
$6.50
Go to store
Product prices and availability are accurate as of the date indicated and are subject to change. Any price and availability information displayed on the linked website at the time of purchase will apply to the purchase of this product.  See full search results on eBay

Codes And Keys is ranked 6th best out of 14 albums by Death Cab For Cutie on BestEverAlbums.com.

The best album by Death Cab For Cutie is Transatlanticism which is ranked number 353 in the list of all-time albums with a total rank score of 5,615. 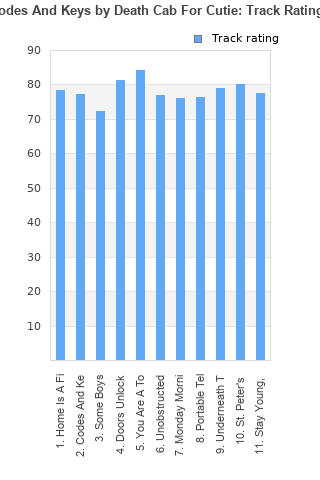 Rating metrics: Outliers can be removed when calculating a mean average to dampen the effects of ratings outside the normal distribution. This figure is provided as the trimmed mean. A high standard deviation can be legitimate, but can sometimes indicate 'gaming' is occurring. Consider a simplified example* of an item receiving ratings of 100, 50, & 0. The mean average rating would be 50. However, ratings of 55, 50 & 45 could also result in the same average. The second average might be more trusted because there is more consensus around a particular rating (a lower deviation).
(*In practice, some albums can have several thousand ratings)
This album has a Bayesian average rating of 68.9/100, a mean average of 68.7/100, and a trimmed mean (excluding outliers) of 68.7/100. The standard deviation for this album is 15.3.

Highlights are Doors Unlocked and Open and You are a Tourist.

St. Peter's cathedral increasingly grows in intensity interestingly enough. Although repeatedly smacking me in the face with your personal belief that there is nothing past this life is preachy. How the hell does Ben Gibbard know any better than the rest of us?

The rest of these songs are delivered in a mix of nursery rhyme and riddles that are uninteresting and less melodic than previous efforts.

I guess a lot of it is electronic music. I don't mind the shift from guitar to this but the execution is blah.

Some Boys sing annoying. Like Ben Gibbard in this song.

The beginning of the album is unmemorable. It doesn't gain a pulse until the fourth song.

Then the lyrics get contradictory. Your A Tourist encourages you to leave home and experience new things. Songs that follow are self critiques on Gibbard's inability to stay put anywhere. So which one is it Ben?

This album is better than Death Cab's first 2 albums but that is it. It's a bit below average with 2 really good songs only.

About 5 of the songs on this album are among the best Death Cab ever did.

It may not be Death Cab's best, but I really can't comprehend all the hate it gets from many Death Cab fans. It's really quite stellar.

I wonder what he's trying to unlock. Because I still haven't found the safe. I can dig it.

K, I adore this album. It is musical heaven. I think of it as Death Cab for Cutie's masterpiece. The funny thing is that literally NO ONE ELSE even likes this album very much. I've heard it called generic, boring, and not artistic on many occasions. But these accusations are simply not true.

The album begins with "Home is a Fire," a perfect introduction to a perfect album. Its peaceful but compelling beauty seamlessly eases you into the experience. "Codes and Keys" is next, a solid track stylistically similar to Death Cab's earlier work.

Then comes "Some Boys." This song makes me want to cry. It is so raw and gorgeous. Every time this song begins, I get an unreasonable rush of euphoria. And directly following is "Doors Unlocked and Open." This masterpiece is probably the best song on the album. It makes my very frame permeate with intense emotion. And the way it flows into "You are a Tourist," one of the greatest rock anthems ever, is sublime.

"Unobstructed Views" serves as a peaceful transition to the second half of the album, where we encounter "Monday Morning" and "Portable Television." These songs are just plain awesome. And the latter serves as a profound and early semi-climax to the album.

"Underneath the Sycamore" and "St. Peter's Cathedral" are two very beautiful tracks. Though the former is kind of a generic Death Cab song stylistically similar to music from Plans, these two both expand the album's transcendental feel before leading into "Stay Young, Go Dancing."

So you remember when I said "Doors Unlocked and Open" was the best track on the album? I think I lied. "Stay Young, Go Dancing" is so pathetically beautiful that it really deserves that distinction. It is the album's wonderful and bold final denouement.

Although this is not even close to their best, I do not think the rating is giving it justice.

Favorite tracks: You Are a Tourist, Portable Television

I loved this album when it came out, stopped liking it as much for a while, but have come back up on it. This is really underrated. That isn't to say this is some perfect record. In some ways, it actually is. There's really not anything bad to say about this album, other than it doesn't take many risks. Also, the songwriting, and Ben Gibbard's lyrics, are not as great as primo-Death Cab. That being said, none of these songs are bad. They range from good ("Some Boys", "You Are a Tourist", "Codes and Keys", "Home is a Fire") to great ("Stay Young, Go Dancing", "Monday Morning", "Unobstructed Views", "Portable Television") to some of Death Cab's finest ("Doors Unlocked and Opened", "Underneath the Sycamore", "St. Peter's Cathedral").
Really, it's so good, and these songs are so friendly and full of optimism. Gaaahhh!!! So good.

I agree, ProfessorSquid - this is a good album. When I saw them play earlier this year I actually wished they played more songs from the album as they only did 3 songs (Codes and Keys, Doors Unlocked And Open, and You Are A Tourist)

Am I some kind of a hack? I'm confident this is better than others are giving it credit for.

Your feedback for Codes And Keys