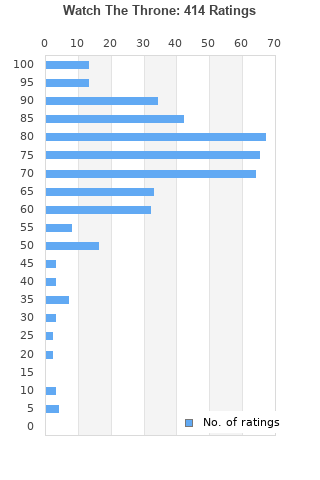 Jay-Z & Kanye West Watch The Throne Taiwan CD w/OBI
Condition: Brand New
Time left: 21h 55m 59s
Ships to: Worldwide
$39.88
Go to store
Product prices and availability are accurate as of the date indicated and are subject to change. Any price and availability information displayed on the linked website at the time of purchase will apply to the purchase of this product.  See full search results on eBay 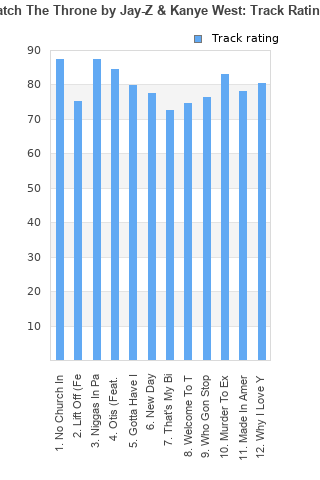 Rating metrics: Outliers can be removed when calculating a mean average to dampen the effects of ratings outside the normal distribution. This figure is provided as the trimmed mean. A high standard deviation can be legitimate, but can sometimes indicate 'gaming' is occurring. Consider a simplified example* of an item receiving ratings of 100, 50, & 0. The mean average rating would be 50. However, ratings of 55, 50 & 45 could also result in the same average. The second average might be more trusted because there is more consensus around a particular rating (a lower deviation).
(*In practice, some albums can have several thousand ratings)
This album has a Bayesian average rating of 73.7/100, a mean average of 72.2/100, and a trimmed mean (excluding outliers) of 73.7/100. The standard deviation for this album is 16.9.

One thing I noticed listening this again is how much energy it has. You can feel they were really pumped up making this; that they really enjoyed working together, and basically just ego tripping. I love it.

I overlooked this when it first came out, but this is actually pretty song.

A pretty good collaboration album by Jay-Z and Kanye West. I believe that Kanye brings out the best of Jay-Z in this album.

Huge and refreshingly unpretentious compared to Kanye's "Yeezus", for example (not that I don't like that album). A crowd-pleaser with interesting production, resulting in some full-on bangers, and a mixture of diverse lyricism. It's not a brilliant album, but I couldn't name a single bad track - which says something about the high quality of the finished product.

Not that great overall, finishes strong though.

Although certainly not the crowning achievement of either's career, Throne turned out to be a solid album with some great tracks

It's a decent album, but it's carried entirely by the two personalities behind the microphone. The production is a little scattershot and pales in comparison to anything West did on MBDTF. When they're rapping about world issues there are some good lines, but when they're rapping about fame and needing eight arms to hold all their watches or whatever I just get bored. Even the guest spots are better than the actual musical content. So yeah, fun collaboration but a little disappointing when placed next to the other stuff they've done.

Your feedback for Watch The Throne