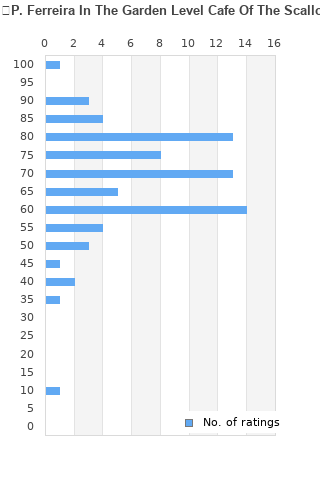 Sorry, no matches on eBay for "Bob's Son R A P Ferreira In The Garden Level Cafe Of The Scallops Hotel RAP Ferreira".
See full search results on eBay

Bob's Son: R​.​A​.​P. Ferreira In The Garden Level Cafe Of The Scallops Hotel is ranked 2nd best out of 3 albums by R.A.P. Ferreira on BestEverAlbums.com.

The best album by R.A.P. Ferreira is Purple Moonlight Pages which is ranked number 4759 in the list of all-time albums with a total rank score of 283.

Listen to Bob's Son: R​.​A​.​P. Ferreira In The Garden Level Cafe Of The Scallops Hotel on YouTube 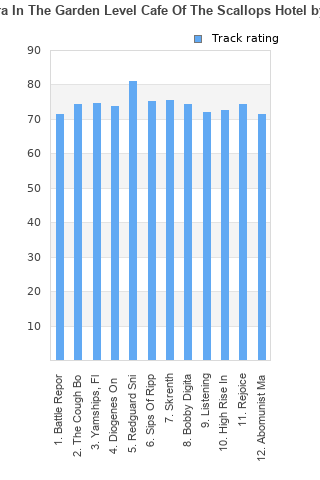 Rating metrics: Outliers can be removed when calculating a mean average to dampen the effects of ratings outside the normal distribution. This figure is provided as the trimmed mean. A high standard deviation can be legitimate, but can sometimes indicate 'gaming' is occurring. Consider a simplified example* of an item receiving ratings of 100, 50, & 0. The mean average rating would be 50. However, ratings of 55, 50 & 45 could also result in the same average. The second average might be more trusted because there is more consensus around a particular rating (a lower deviation).
(*In practice, some albums can have several thousand ratings)
This album has a Bayesian average rating of 70.8/100, a mean average of 70.4/100, and a trimmed mean (excluding outliers) of 70.4/100. The standard deviation for this album is 12.9.

"Bob's Son" feels like a slow night at a poetry slam. R.A.P. Ferreira raps in off kilter style over cut jazz samples in a way that just doesn't fit. The flow often feels out of sync with the beats themselves, beginning when it should be ending. The lyrics themselves definitely display a strong vocabulary. Strange obscure phrases and words will be weaved in to mixed effect. The biggest problem is it doesn't really make any profound point. Most of the diction is surface level rather than indicative of a greater point. The spirit is there but not the meat of any real discussion.

A really fun sonic trip but It's not insanely memorable. However, I did find myself saying "you are listening to bob's son, go bob's son" and other similar phrases a lot after a few listens.

Somehow it seems I am in the minority for enjoying this album a lot. This is an incredible abstract hip-hop album with some really unique beats and very slick word play. R.A.P. Ferreira is a poet and it shows with some incredible bars that make you think. At first this album didn't do much for me but the more I listened and paid attention to the lyrics this album as grown on me a lot.

This is my first time hearing anything by R.A.P. Ferreira, including when he was known as Milo. Maybe I shoulda gotten on his 2019 album (I heard its really good).

But considering this is a completely blind, fresh listen, I'll say what I thought.

The intro is a bit funny at first but quickly wears out its welcome. After that first statement of sorts, the album flows with a nonchalant, effortless quirkiness which I generally really like. Some of the raps which I think are supposed to give off an aura of just easy brilliance, natural and off hand poetry, feel flat and a bit like they could have used a bit more working over to make the raps actually, you know, good and finished and creative. Sometimes these types of "off the top of my head" rhymes work really well with the sleepy, relaxed production though. Its a mixed bag.

"redguard snipers" is awesome! Not sure what it is exactly, but the way the vocals and beat work together and play off each other is sublime. The last half of "Sips of Ripple Wine" is mesmerizing. The beat in "Bobby's Digital Little Wings" is so fucking strange! In the best way. Its strange in a kind of mind-bending and expanding way. Its sleepy and relaxed, but the notes come in so sharply they seem to counteract the mellowness of it. Its great.

All in all the production of this album seems to be the best kind of zigzagging, effortless and whimsical. And the way Ferreira plays with the tracks and kinda weaves in with it or comments on seemingly random poetic ramblings in a really refreshing and engaging way is great. I never felt fully familiar with the music, but I was also never uncomfortable or anything less than relaxed. Its was really a very pleasant experience and maybe the first album of the year I really was surprised by.

R.A.P. Ferreira is out here making some incredible art, creating work passionately for himself regardless of who listens. Make sure to go to the cafe for the full VR experience of the album, amazing and innovative project. https://cafe.rubyyacht.com

As a not-even-casual-listener of rap, I was hesitant to spend any real time giving Bob's Son a fair chance...but once I started listening I was really impressed straight through. This is seriously intelligent stuff that deserves the full attention of any self-respecting music fan. It's more than just a beat and some rhymes; the album explains some really interesting themes that deserve additional consideration.

Your feedback for Bob's Son: R​.​A​.​P. Ferreira In The Garden Level Cafe Of The Scallops Hotel